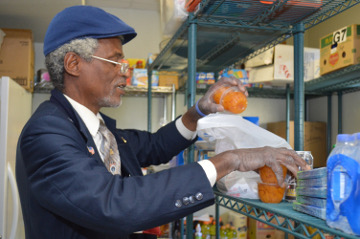 Alanzo Green, who is part of a senior citizen job program, puts food in bags at the Salvation Army in Port Arthur on Wednesday. Mary Meaux/The News

Alanzo Green carefully put fruit cups in bags earmarked for the needy in the pantry at the Salvation Army.

Green, who is working through a senior citizen job service project, has long been associated with the Salvation Army.

“I started as a volunteer ringing the bell,” Green said referring to the Red Kettle Campaign. “I’ve always enjoyed it.”

The pantry isn’t all the way bare, but there are needs to be met; a new fiscal year recently began after ending in the red, donations are down and the holidays are fast approaching.

Dinners are $10 each and include fried catfish prepared by a crew from Texas Gas Service, hush puppies, green beans, cole slaw, dessert and a drink. Tickets are available at the Salvation Army or call 983-2229. Tickets will be available on the day of the sale. All proceeds go directly into the Salvation Army’s operating funds.

One possible reason for the decrease in donations is linked to a Salvation Army lock box in Kountze that serves various areas including Port Arthur.

But there are ways for the public to help. They can go by and visit the two day a week rummage sale, which is open from 8 a.m. to 3 p.m. Tuesdays and Thursdays at the facility.

“Christmas is coming and we will need volunteers for the Red Kettles, the toy shop and to adopt an angel from the Angel Tree,” she said.

Krautz looks to go 2-0 versus Indians

NEDERLAND — Austin Krautz likes the fact he is 1-0 versus the Port Neches-Groves Indians. He likes it so much... read more