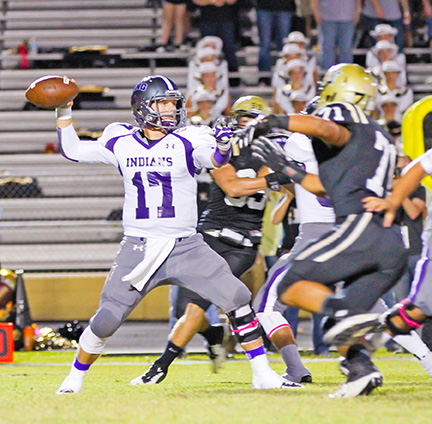 PN-G quarterback Adam Morse and the Indians face Nederland Friday at 7 p.m. Friday at The Reservation.

PORT NECHES — Port Neches-Groves quarterback Adam Morse just wants to get the first completion out of the way.
After that, Friday night’s game against the Nederland Bulldogs will become a football game and the nerves will go away.
Morse admitted at first, there are going to be butterflies in his stomach and he will be a little anxious when staring across the field at the Bulldogs (4-2, 3-0) defense.
“For me, it all goes away after that first completion,” Morse said. “After that, I am good to go. All the nerves and butterflies go away and then it is just a game.”
Last year was not so easy for the second-year starting quarterback. He was a junior and it was his first start in Mid County Madness: The Bum Phillips Bowl.
“We are trying to make this week as normal as possible,” Morse added. “That is hard to do with all the hype and pressure that comes with Mid County Madness.
“I don’t personally feel as much pressure as last year. It was my first start against Nederland so I had a lot of nerves. This year I am going to take it better and play more relaxed.”
Morse and the Indians (5-1, 3-0) lost a heartbreaker in 2014 against the Bulldogs. Nederland won, 35-28, and former Nederland defensive back/quarterback Sage Seay stopped Morse just short of the endzone late in the fourth.
Morse had 289 yards on 17-of-31 passing with one interception and two touchdowns last year. He also ran for 43 yards on 10 carries.
Morse has not thought of what it would be like if he left PN-G with no wins against Nederland in his career. He is not worried about that part of this rivalry.
“I just want to win district and we have to beat them to do that,” Morse said. “They are another team in our way of accomplishing of what we want to do.
“To be the best, you have to beat the best. They have definitely shown over the last few years they are the best team in our district. A 29-game winning streak in our district is pretty tough to pull off.”
The Bulldogs most powerful weapon heading into this game happens to be Morse’s good friend, running back Austin Krautz.
“It has been a fun week,” Morse said. “We go to a youth thing for Mid County called Young life. We joke around the whole time about who is going to beat who. I drove out their parking lot playing the war chant. It is fun.
“That all goes away at 7 p.m. Friday. Even after the game though, we are best friends again. It is like nothing ever happened but during those 48 minutes, it is crazy out there.”
So how does Morse like his team’s chances of ending a five-game losing streak versus Nederland?
“Our team is focused,” Morse said. “I could tell after the game last week, they were ready. I heard someone yell ‘We have to practice every day like it is a game.’ You have to treat this game that way.”