Krautz looks to go 2-0 versus Indians 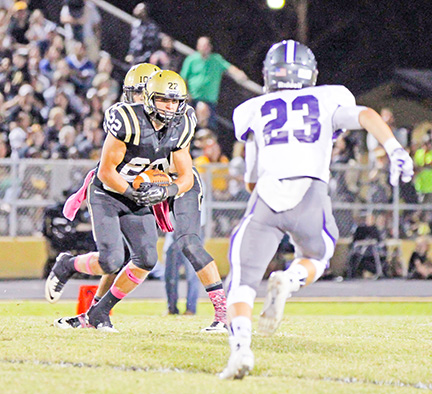 News file photo Nederland senior running back Austin Krautz is looking to go 2-0 against PN-G in his Bulldogs career.

NEDERLAND — Austin Krautz likes the fact he is 1-0 versus the Port Neches-Groves Indians.
He likes it so much he is going to try everything in his power to make sure the senior Bulldogs running back leaves Friday night undefeated against his rivals.
The Bulldogs and Indians meet for the 92nd time this Friday at The Reservation in the Mid County Madness: The Bum Phillips Bowl.
Krautz has only played in one game against the Indians. He rushed for 74 yards on 20 carries with two touchdowns in a 35-28 Nederland victory last year. Krautz also caught four passes for 81 yards.
He admitted last year’s game was full of tension and he was nervous when it came time to hit the field against the Indians.
“There are a lot of nerves because of the amount of people who are at the game,” Krautz said. “You want to well for your city, both teams do. It is always a good battle.”
One of the things that makes this Friday’s game so interesting is how close the communities is geographically and how players on Nederland know players on PN-G.
Krautz is good friends with Indians quarterback Adam Morse. The two even showed up to a preseason photo shoot together in the same vehicle.
“We saw each other on Monday,” Krautz said. “We talked about the game a little bit. Once Friday night comes, it will be a little different.”
While Krautz pulls for Morse to have success for nine weeks a year, he wants to make sure he leaves Nederland with a perfect record against the Indians.
Krautz wants to turn his 1-0 record into 2-0 and to once again hoist the Bum Phillips Bowl trophy.
“That would be awesome to have that for the rest of my life,” Krautz said. “This group of seniors wants to own this season.”
The Bulldogs have won 10 games since Krautz first started as a junior last year. He has played in a playoff game and defeated other 22-5A teams but no win felt as good as last year’s Mid County Madness.
“It is a different feeling when you win against PN-G,” Krautz added. “Both teams are going to play their best that night. If you beat them when they are at their best, it is a great feeling.
“You have to stay focused. There are a lot of ups and downs in this game. You just have to realize you have to put the bad things behind you and focus on the good things. I like being the underdogs than say if we were favorites. I like that. It makes it a little sweeter if we were to win.”