Bum Phillips Bowl Trophy back up for grabs 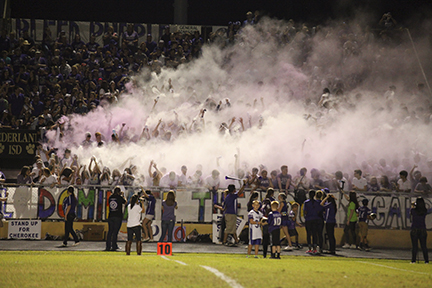 For more than a year, the Port Neches-Groves Indians have waited for this week.
It has been that long since the Nederland Bulldogs won the Bum Phillips Bowl trophy, 35-28, in Mid-County Madness at Bulldogs Stadium. The 92nd meeting between the two schools this year will be played at The Reservation this upcoming Friday.
PN-G holds a 48-36-7 record over Nederland, but it is the Bulldogs riding momentum over the Indians. Nederland has won five straight over PN-G, dating back to the Indians’ 23-7 win in 2009.
The Bulldogs’ five straight wins have been by an average of 9.2 points per game. It includes a 37-12 win in 2012, the same year PN-G went 2-8.
PN-G enters the 2015 edition as the favorite. The Indians are loaded on offense with Lamar commit and quarterback Adam Morse at the top of his game.
Morse has ample weapons on his side with UTSA commit Jack Giblin and Lamar commit Caisen Sullivan, both receivers, causing problems for opposing defenses.
Add in superb running backs Kody Cropper and Jace Runnels, and the PN-G offense becomes very scary.
The Indians are not all about offense this year. The PN-G defense has been very tough to score on in 2015. Over the last four games, PN-G is giving up 14.8 points per game.
Nederland counters with the district’s most deadly running back, Austin Krautz. Krautz ran for 234 yards and scored five touchdowns (four rushing, one receiving) this past Friday against Beaumont Central and remains District 22-5A’s leading rusher.
Quarterback Mitchell LeBaron has been more than impressive in his first year starting under center.
Nederland’s defense can be scored upon, giving up 28 points per game, but the Bulldogs have won four straight and find a way to win under the coaching of Larry Neumann.
The winner of Friday’s game not only wins a shiny trophy. That team becomes the lone undefeated team in the district standings with three games to go before the playoffs.
A 4-0 start in District 22-5A all but locks up a postseason berth for the winner.
PN-G has three tough games after Friday with a trip to Beaumont Ozen, a home game against Beaumont Central and a travel to Vidor left in 2015.
Nederland finishes its year at home against Baytown Lee, on the road against Goose Creek Memorial and back at Bulldogs Stadium against Lumberton.