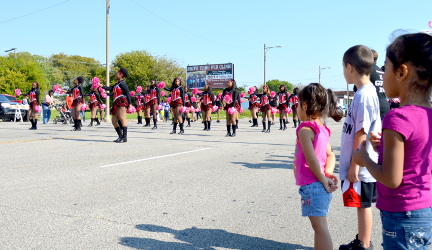 It may not have been as big as days of old, but the weather — bright blue skies and balmy fall-like temperatures — made a perfect cover for this year’s CavOilcade Parade in downtown Port Arthur.

There, beauty queens, marching bands, drill teams and even a biycle brigade led the parade that highlights a festival long known to celebrate the relationship between Port Arthur and the oil and gas and petrochemical industries.

First started in 1953, the annual celebration has gone from extravagant weeklong festivities held in the remodeled Pleasure Pier ballroom to today’s scaled down version.

Some years CavOILcade focused on themed events such as “Arabian Nights,” “Hits of Broadway,” to “Adventures in Space.”

Though the over-the-top festival has downsized through the years, one thing remains constant: The crowing of the CavOILcade Queen and her court.

This year was no exception. Following a long parade winding from the Lamar State-College Port Arthur campus, down Procter Street, to Houston Avenue in downtown Port Arthur was the car everyone had been waiting for.

There, sitting regally on the back of a black Corvette and wearing an elegant white tulle gown was this year’s Queen, Marissa Jacquet.

The Queen’s car was the final entry in a parade that featured marching bands, drill teams, dance teams, and much more — all to celebrate the same oil and petrochemical industry that the area is still known for 61 years after the first CavOILcade event was organized.

“I’ve been coming here for years. This event is representative of the oil industry and is the only one like it in the area,” Clonie Ambroise, said.

Ambroise stood on the sidelines for more than to celebrate the oil industry. Like so many fathers before him, Ambroise was there to watch his son Clonie Ambroise III escort CavOILcade Princess Jasmine Whitaker during the Queen’s Tea, held immediately after the parade.

Crystal Coleman, 36, of Port Arthur brought her daughter 8-year-old Salem out for a nostalgic day in downtown Port Arthur.

“This is nothing like when I was a kid, but it’s still a celebration that is strictly Port Arthur’s own. They used to shut down the city streets. Mardi Gras is the big thing now, but this should be bigger because it is all about Port Arthur.

“I think it is just beautiful out today. It reminds me of the oil and gas industry; I think it needs to be bigger again,” Mark Bernard, 50, of Port Arthur said, while waiting for his daughter’s vehicle Brooke Bernard, 17, to arrive in the parade. Brook Bernard is third runner up in the CavOILcade Princess Contest, her father said.

While many were there to watch their children in the parade, others were there just to participate in a Port Arthur celebration, including one family with five generations present.

“Elijah is out there running to catch the candy. It’s his first parade,” Johnson said. “He loved it.”

While the parade was Elijah’s first, it certainly as not for grandma.

“She loves parades. She wanted to go, so we said, ‘OK, if you want to go, we will bring you,’” Johnson said. “We like to do stuff as a family, especially parades, so we all piled up in the car and came.”