THE MOVIE GUY: Relive the adventure behind ‘The Walk’ 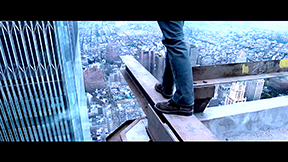 Joseph Gordon- Levitt in a scene from TriStar Pictures’ “The Walk.”

In 1974, a French daredevil named Phillipe Petit stunned the world by walking a tightrope that he had strung between the twin towers of the World Trade Center. The stunt wasn’t captured on film, but director Robert Zemeckis has recreated the event in his very entertaining drama, “The Walk.”

Joseph Gordon-Levitt plays Petit, and he comes across as an enigmatic dreamer who is obsessed with etching his name in history. The film stumbles a bit out of the gate, as the early scenes are a bit lax and don’t really give much of an insight into what made the man tick. We do get some interpersonal drama in the form of a strained relationship between Petit and his mentor (Ben Kingsley), but that’s little more than an interesting set up.

Things shift into high gear when Petit, his girlfriend (Charlotte Le Bon) and some accomplices (Ben Schwartz and James Badge Dale) arrive in New York and start looking for a way to sneak into the World Trade Center so they can set up their extremely high wire. These scenes feature an energetic jazz soundtrack that makes the film feel like a caper movie.

Of course it all leads up to the big event when Petit spent 45 minutes stunning the New Yorkers who had assembled on the street below. Zemeckis handles these scenes expertly with zooming cameras that highlight the danger of this particular tightrope act. The cinematography, in particular, takes you out onto the wire and buffets you with vertiginous camera shots that will haunt the dreams of anyone who is afraid of heights. That’s particularly true if you shell out the extra cash to see this in IMAX 3D — in this case I think it’s worth paying the extra money.

It’s important to mention that the other major player in “The Walk” is the World Trade Center itself. Petit sees the building as a genuine entity that is a co-conspirator in the stunt, but modern audiences will be painfully aware of the events of 9-11. The end result is a sense of wistful nostalgia that keeps the film rooted in history, making the stunt seem, perhaps a bit more important than it actually was.

The end result is a movie that stumbles in its first few steps, but builds into a very entertaining daredevil adventure. I’m not sure that we learn much about what made Phillipe Petit tick, but the movie certainly captures the thrilling excitement of the planning and the execution of “The Walk.”