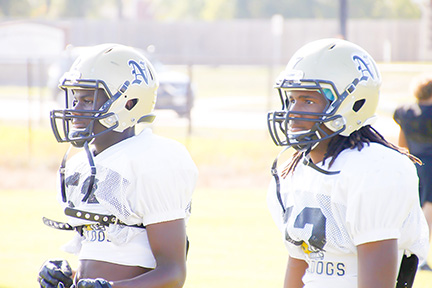 NEDERLAND — Coach Larry Neumann feels his Bulldogs defense can play better. He also knows Nederland is 2-0 in District 22-5A.
“It’s an ultimate team sport,” Neumann said Monday. “We’re 2-0 in the district behind what our defense has done, what our offense has done and our kicking game has been pretty good. Without being good in only two of those phases, we’re probably not 2-0.”
Nederland (3-2 overall) actually scored on defense this past Friday against Beaumont Ozen via Tiren Forney’s 21-yard interception return in the first quarter. The play proved key, as the Bulldogs clung to a 27-25 lead before a touchdown pass with 17 seconds left in the game put it away.
But the yardage the Bulldogs have given up has Neumann concerned.
They rank seventh in 22-5A in yards allowed per game (413.8) and gave up 502 against Ozen. In a 36-30 home win against Vidor, the Pirates outgained the Dogs 481-470, rushing for all but 44 yards.
Vidor leads the district in total offense at 549.7 yards per game. But Nederland is still winning.
“When you keep winning, it just pushes your momentum,” said Jalin Johnson, a junior defensive back who picked off two passes against Ozen. “You’re trying not to lose. You’re trying to stay on top. That’s all it really is.”
This Friday, Nederland will line up against Beaumont Central (2-3, 2-0) in a rematch of last year’s 39-36 nailbiter won by the Bulldogs. Their defense literally earned the victory with a goal-line stand in the final minute after Central had the ball first-and-goal from the Nederland 2.
Neumann realizes the weekly challenge his defense faces, given the evolution of Spread offenses. But the 23rd-year head coach is looking for more consistency out of his unit with five more games to play.
“For us, our defense actually has been pretty good at times, and I think that’s what frustrates me and our coaching staff and our players, for that matter,” Neumann said. “… For us, there have been times we’ve played defense as well as it can be played, and there have been times we’ve bust and as a coaching staff we try to get the nuts and bolts of it, to line up properly, to have the knowledge of assignment and the exercise of trying to execute the assignment.”
The key to fixing any problems with defense is to work on all aspects of it, Neumann added.
“We just have to cover our gaps and do what we’re supposed to do, and we’ll win,” sophomore defensive lineman Forney said.
Still, Neumann stressed, the Bulldogs are atop district standings because they’ve had success not only on defense but on offense and special teams as well. To him, looking for ways to improve in all phases of game is only realistic for a coach.
“There are going to be times you miss a tackle or you get outjumped on a deep ball,” Neumann said. “No coach in America is going to be able to make a player bigger, faster, stronger. They are what they are, and you work on that during the offseason. You have to put your players in the best possible positions for success, and they have to make a play.”