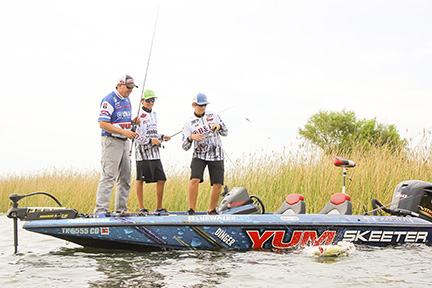 Chester Moore Jr./The News Local bass populations have recently been studied and one fact contained in the story shows a dramatic finding on growth rates.

Southeast Texas is an amazing place to live if you love the great outdoors.
The essence of what we do at this publication is local coverage and we are proud to bring you local, consistent outdoors coverage that goes beneath the surface of the story.
This week I have 10 local outdoors facts that will inform you, increase your appreciate for the region and might just inspire you.
1. Sabine Lake is home to the Texas state record southern flounder. It was caught in one the day before. The Sabine Lake area (out to the jetties and surf) is also where the state record redfish was caught by Artie Longron in 2000. It weighed 59.50 pounds.
2. Speaking of fishing records, here is a wild one that could seemingly only happen here in Southeast Texas. There is a saltwater record for flathead (opelousa) catfish which is wild because they are not very saltwater tolerant. This record was caught in Sabine Lake by Bobby Hutchinson in 2004 and weighed 23.32 pounds.
3. Jefferson County is consistently ranked among the top 3 Texas counties for duck harvest. The last survey I saw showed it second place behind Colorado County. Our region is the epicenter of waterfowling in the state with the most public hunting land and a wide variety of hunting options.
4. Did you know that striped bass were stocked into the Sabine Lake area for a number of years up until 1994? According to Texas Parks & Wildlife Department (TPWD) officials it is believed that stripers need a cool water refuge in the summer to escape the higher water temperatures. A Gulf-wide study of available habitat revealed that a refuge of this type is lacking along the Texas coast. In the Gulf, only Florida has a small self-sustaining population of striped bass inhabiting coastal waters. Sabine Lake occasionally produces stripers in the winter but those fish are migrants from the below the Toledo Bend tailrace area.
5. Current data indicates that largemouth bass in local bayou systems are relatively abundant, but have slow growth and high mortality rates. TPWD reports that on average, largemouth bass here reach 14 inches in length at 3.9 years. For reference, largemouth bass at Sam Rayburn and Toledo Bend reservoirs reach 14 inches at approximately 2.5 years. Slow growth and high mortality rates are common to coastal estuary populations (primarily due to influences of variable salinity and availability of quality forage) and result in few fish of larger sizes.
“Only seven percent of the largemouth bass we sampled from these three systems were greater than 14 inches in length,” said TPWD biologist Todd Driscoll.
6. The original whitetails in our area were of the Avery Island Whitetail subspecies. This variety ran from south-central Louisiana into Southeast Texas up toward the southern end of the Pineywoods down toward the coast. It is debatable how many still exist since our region received many deer stockings years ago but our origins are of the Avery Island variety.
7. Jaguars were once common in Southeast Texas. John James Audubon the great naturalist and painter interviewed General Sam Houston who said “there are many jaguars east of the San Jacinto River.” That is right in our home area. In addition the last known jaguar in East Texas was killed and brought to the Jasper County Courthouse in 1929.
8. Somewhere deep in the Jefferson County landfill are remains of a whale shark. That’s right a whale shark. I remember seeing the photo of the 40 foot fish when it appeared in the papers in 1982. Here’s a bit from the United Press International Archive.
“A rotund 26-foot whale shark nicknamed ‘Gums’ died an unusual death in an oyster bed in Sabine Lake, a biology professor says.”
“Dave Bechler, Lamar University assistant biology professor, said Friday the shark was a rare find along the Texas coast because it does not normally inhabit Texas coastal waters.”
And yes, it was actually dumped in the local landfill.
9. There is more public hunting land in Jefferson, Chambers, Orange, Newton, Jasper and Angelina Counties than there is the rest of the state combined. Draw a line from Toledo Bend and Sam Rayburn South to the coast and you have the bulk of the public hunting land in Texas.
10. About 1/3 of the 3,434 banded teal killed and recovered in Texas, come from the Jefferson and Chambers County area. Part of that has to do with hunting pressure in the area and the other is a massive amount of teal that pile up on the coastal prairie and marsh.
(To contact Chester Moore, e-mail him at chester@kingdomzoo.com. You can hear him on “Moore Outdoors” Fridays from 6-7 p.m. on Newstalk AM 560 KLVI or online at www.klvi.com.)