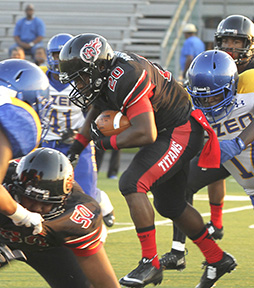 Marcus Younger is looking to make a bigger impact out of the backfield for Memorial as a senior. (Morgan Jones/Special to The News)

There is no denying 2015 has been a struggle for Marcus Younger and the Port Arthur Memorial Titans.

The senior running back and his teammates are off to 1-5 start and have fallen to 0-2 in the District 21-6A standings. Still, Younger has high hopes for the Titans, who face Baytown Sterling at 7 p.m. Thursday at Stallworth Stadium.

The playoff run still has time for the Titans to start winning games and sneak back into the postseason after missing out last season.

“We want to come out and win every game,” Younger said. “We have to take these final ones game-by-game. I know we can do it. Our backs are against the wall and that is how we like it.”

It is this positive attitude coach Kenny Harrison has preached to his players over the last several weeks.

“We have a great senior group and unfortunately we have come up short in some ball games,” Harrison said. “We are going to keep plugging away and keep fighting hard.”

Younger said the winning formula is quite simple: “We have to work hard at practice and stay positive.

“Losing hurts bad. We have to believe that things can turn around. We can’t ever give up.”

Despite an early-season ankle injury that has not kept Younger out of any games but nagged him all year, No. 20 has averaged almost five yards a carry.

Younger has 234 yards on 45 carries with three touchdowns.

“Marcus is a really explosive player,” Harrison said. “He had the ankle injury to start the season but now he seems to be fully healthy. Having both him and Kameron (Martin) in the backfield is a real luxury for our football team. They are both guys who are big time players. Marcus can run between the tackles and can also stretch it outside. He takes a lot of pressure off Kameron.”

Younger and Martin are no strangers to each other on a football team. The two have been playing the sport together since their days in Pop Warner football.

“I have been playing alongside Kameron since we were kids,” Younger said. “It feels good to play by one of my best friends.”

Younger also likes something very odd about the sport of football — getting hit.

“I like getting hit,” Younger said. “I don’t ever think about taking on the big hit because it really doesn’t hurt me. I seek it out sometimes. I look forward to running someone over who tries to stop me.”