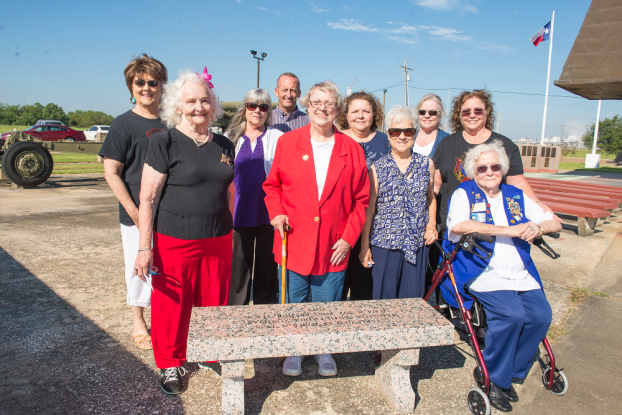 Even with the inclusion of the VFW men later in the group’s history their numbers continued to dwindle. Through this time they also lost their post home and were forced to meet at local restaurants.

Sherry Morgan, who is part of five generations of family who have supported the VFW as veterans and auxiliary, is president of the group.

“This is sad and a very emotional thing for all of us,” Morgan said.

Eighty-seven years ago on Oct.4, 1928, a group of 15 women organized Hamilton Post 797 Ladies Auxiliary. The post is named after Hamilton Smith, the first soldier killed from Port Arthur in World War I who is a distant relative of Morgan’s father, James E. Fant. Jr.

“With veterans from World War I, proud patriotic men formed VFW Post 797 to honor and serve local veterans,” she said. “My grandfather, Peter C. Blanchard Sr., was one of those men. Five generations of his immediate family have served in this ladies auxiliary.”

Through the years the auxiliary were participants in all local VFW programs including National Home for Children, Buddy Poppy sales, veterans clinic, Americanism education for youth through Voice of Democracy essay Contest, Patriot’s Pen and Patriotic Art as well as recognition of Prisoner’s Of War/Missing In Action, Gold and Blue Star Mothers, cancer aid research and veterans and family support.

“All ladies have members who have served our great nation with pride and sacrifice to keep us free. Freedom is not free,” Fant said.

Morgan said that her mother still sings WWI songs she, in turn, learned from her father.

The auxiliary has kept extensive scrapbook records of all of the group’s activities for the eight-plus decades and hopes to donate the items to the Museum of the Gulf Coast, she said.

“We had a very, very active post with men and women alike,” Morgan said. “But the last five years it had been 10 people holding the post together.”

The auxiliary group recently gathered the last of their funds and had an engraved granite bench created for donation to the Veterans Memorial Park.

“So you see, it is with sincere passion, pride loyalty and honor that we have all worked so hard to keep this organization alive,” Morgan said. “We shall never forget the sacrifice made by al generations of our Veterans of Foreign Wars and these ladies who have given unwavering support to Hamilton Smith Post 797 Ladies Auxiliary. The closing of Hamilton Smith Posts 797 has touched our hearts. End of an era.”

This Sunday, Oct. 4, at 9 p.m. the Discovery Channel will be airing the program called, “On The Case”, with... read more