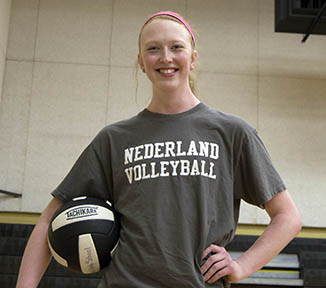 NEDERLAND — At 6-feet-2, Nederland senior Courtney Noel has the height to be a very good volleyball player.

What her coach Kristin Lemoine likes the most is the fact Noel is so much more than her towering presence on the volleyball court.

Noel is a three-year starter for the Lady Bulldogs. She and the Lady Bulldogs lost only once through the first round of District 22-5A play and still have their eyes set on the league crown.

“We want to win the district title,” Noel said. “Then, we want to get past the first round after losing in that round the last two seasons.”

Like most seniors, Noel has a hard time believing she is already a senior in high school. The years seem to fly by for players like her who spend so much time in athletics while also maintaining a high grade-point average in the classroom.

“I feel like this year is the completion of everything I have waited for,” Noel said. “We (seniors) don’t have as much time as we did to do what we want to do. Last year, we knew we still had our senior year. This year, there is nothing left.”

Lemoine said Noel is the perfect leader. She gets vocal when the time calls for it and also spends time with the younger players.

“She is a great leader,” Lemoine said. “She is very smart and the younger players love working with her. She is very encouraging with them. She enjoys teaching her skills to the younger group. She is just an overall great kid.”

It is rare for most athletes to start three full seasons on the varsity level. When athletes do get the shot, by the time they are seniors, they have learned so much about the specific sport.

“You don’t get many three-year starters,” Lemoine said. “She brings in a lot of experience and a lot of knowledge. Courtney has a volleyball mindset. If you don’t have that, it doesn’t matter how tall you are because you aren’t getting anywhere.”

Said Noel: “As juniors, the senior group was more vocal than we were. Coming into this year, we as seniors had to become the leaders.”

JANICE TODORA ON BOWLING: Fall season is back

Bowlers, we are back to reporting the highlights for this fall season for the Max Bowl. First let’s do a... read more