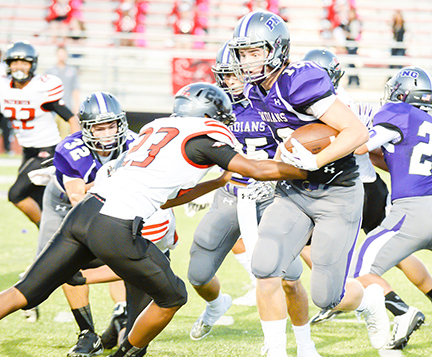 PORT NECHES — Cole Girouard was worried about staying on his feet and not tripping in front of the hometown Port Neches-Groves fans.
The senior defensive back remained upright and so did the rest of the Indians as they defeated Goose Creek Memorial, 42-14.
Before the game, coach Brandon Faircloth had reason to feel a bit anxious as he learned senior receiver Jack Giblin would not play due to flu-like symptoms.
The Indians responded the best way they know how with 332 yards of total offense and three interceptions on defense.
PN-G’s second of the three interceptions was by Girouard, who returned the pick 43 yards for a touchdown to put his team up 35-7 with 7:26 left in the third.
“Turnovers are always important,” Girouard said. “Three turnovers is always our goal. We work on it all week. I couldn’t believe I was that wide open. It was an amazing feeling. I just kept telling myself not to trip.”
Nathan Vidrine and Anthony Anniboli also had interceptions for the Indians. Vidrine could have had a second late in the game, yet he maybe was thinking of a score before catching the ball that found the ground and not his hands.
The Indians had zero turnovers a week after only having one giveaway against Baytown Lee.
“That is one of our points in our plans to win,” Faircloth said. “We have to win the turnover battle. Tonight we were able to do that.
“We almost had that fourth interception. Our defense played well tonight. I was pleased with all of them. They did a good job of stopping the run and our defense did a good job getting them into third-and-long and then coming up with interceptions.”
Quarterback Adam Morse showed no real signs of missing two of his top receivers in Giblin and Keynel McZeal. Morse finished 14-of-23 passing for 224 yards with three touchdowns and no interceptions.
McZeal missed his second straight game with a wrist injury.
Morse said when he heard the news of Giblin missing the game he never panicked.
“It was just more adversity,” Morse said. “We are getting used to it now. We responded really well. Evan Achee and Dylan [McGough] both had really good games. I have rhythm with every single one of them. Every one of them can go get the ball and everyone blocks. I love it.”
Morse knows his team is hard to beat when the defense gives the offense a few more possessions a game.
“Landsharks,” Morse said referring to the PN-G defense’s nickname. “Nobody talks about our defense and they should be. They are doing a great job and they are only giving up about eight points per game. They are doing a heckuva job.”
The Indians defense is allowing 12.4 points and 211.8 per game to be exact.
PN-G opened the game in style.
First, McGough had a long kickoff return to set PN-G up at the Goose Creek 40-yard line and on its first play Morse hit Caisen Sullivan for a 6-yard pass.
Morse then found running back Kody Cropper on the next play for a 34-yard touchdown strike to put the Indians up 7-0 after Gunnar Nicholson nailed the PAT.
The Patriots responded on their first possession that ended with a Stephen Adams touchdown run, but PN-G was not done scoring in the first quarter.
PN-G drove down the field and scored on a 7-yard touchdown reception by Sullivan. Sullivan finished the night with 82 yards on eight catches and two touchdowns.
His second touchdown came early in the fourth to put the Indians up 45-7.
Jace Runnels and Morse each had 1-yard touchdown runs for the Indians.
Faircloth was pleased with the way his team played on Friday against what was a very dangerous Goose Creek team.
“Wins are hard to get in this district,” Faircloth said. “Anytime you can get a win in this district, you have to feel good about it. They are never easy and games always come with adversity. I am proud of our guys for responding to the adversity.
“Everyone is one play away from going in and being the guy.”