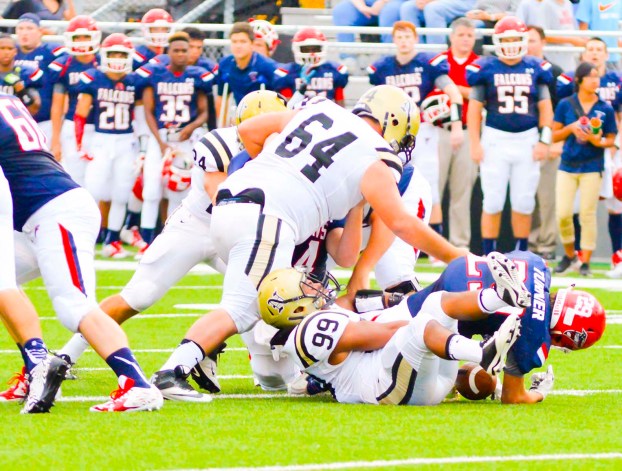 • Nederland coach Larry Neumann: “Defensively they [Panthers] put a lot of pressure on your line because they stunt quite a bit. You have to be focused on your assignment. To coach [David] Suggs’ credit they are more disciplined and cleaner all the way around. I won’t say I am surprised by Mitchell’s play but I am very pleased how he has been able to execute our offense. When he has had to go off script, it has been a very positive experience whether he has thrown the ball away to avoid a sack or to find an open receiver. He can also run with the ball. He has improvised really well. At any level, when a quarterback can go off script, that team has an advantage the other team does not. I am very happy with how Mitchell has been able to do that.”

NEDERLAND — Every week it is the same thing for the Nederland Bulldogs, big games against teams giving them their best effort.

It comes with the territory.

Last week the Bulldogs took the Vidor Pirates’ best shot and, in the end, Nederland escaped with a 36-30 victory.

This week it is the Beaumont Ozen Panthers’ chance to knock off the four-time defending district champion Bulldogs.

“Physically, we came out of the last game pretty clean,” Nederland coach Larry Neumann said. “We have no more wear and tear than we normally would have [after a game]. It was an intense game. Both teams played with great physicality and emotion all the way until the end. That is what we have told our players to expect every week in District 22-5A. Our focus is on Ozen.”

Ozen comes into the game after losing its 22-5A opener 59-21 to the undefeated Lumberton Raiders.

The Bulldogs are ready to try and stop one of the area’s most dangerous quarterbacks, Ozen senior Josh Boyd.

Boyd, in his third year starting at quarterback, has thrown for 719 yards on 42-of-71 passing with five touchdowns and one interception. He has also picked up 182 yards on 47 carries with one touchdown.

“He is a very talented athlete,” Neumann said. “He is always looking downfield when he is scrambling but when he does decide to run he becomes very dangerous. He is hard to tackle if you do get a chance to tackle him.

“He presents a lot of problems from that position by the way he plays it. He puts a lot of pressure on your back end because if they come up on receivers, he will find them. It will be a challenge to try and contain him just like it was last year. It is always a challenge for anyone who plays Ozen.”

Ozen has put up the third-most points and allowed the second-most points out of the 22-5A teams through four games. The Panthers average 30 points on offense and gives up an average of 33 on defense.

Nederland counters with an offense that averages 35.6 points, second-best in 22-5A, and its defense allows 30.8 points, third-most in the district.

No matter the stats or teams, Neumann knows his team can accept large crowds and excitement for the rest of the season.

“The uniqueness of the geography of our district lends itself to the communities supporting their teams,” Neumann said. “The community really gets behind them. We had a crowd the other night against Vidor, I won’t say it was like Port Neches-Groves, but the stands were filled on both sides.

“You are going to get something like that every week because of the geography. We will see another good crowd when we visit Ozen and I think our fans will travel well on Saturday. It is exciting. Anyone who doesn’t want that environment, coaching and especially playing, there is something wrong with you. You want that big game environment.”

ARLINGTON (AP) — The music was a little louder in the Texas clubhouse, and there was the faint smell of... read more