Tow truck drivers ask motorists to slow down, move over 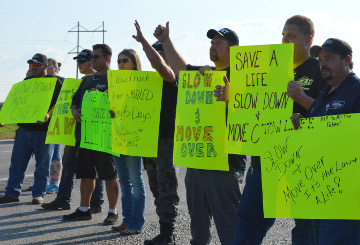 Tow truck drivers from SWAT Towing and Brian’s Wrecker Service line the roadway along Texas 73 west of Taylor Bayou Bridge reminding motorists to slow down and move over on Wednesday. Mary Meaux/The News

Every time the police scanner goes off for a call of a major traffic accident Darla Socia becomes paranoid.

“I worry every time he walks out the door,” Socia said of her husband Joey Socia who’s a tow truck driver with Brian’s Wrecker Service. “I listen closely for when they’re (tow truck drivers) are hitting the roadway and just panic.” 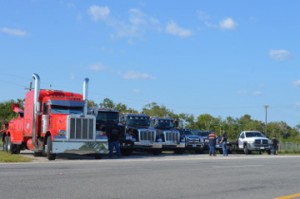 As she spoke, 18-wheelers and passenger vehicles sped past going upwards of 75 mph along a stretch of Texas 73 west of the Taylor Bayou Bridge. “Right now I can feel the suction of the trucks going by.”

The Socia’s were among a group of Port Arthur tow truck drivers who are working to spread the word — slow down and move over. 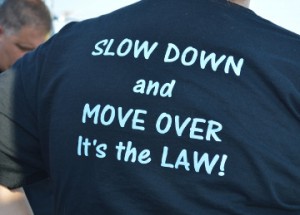 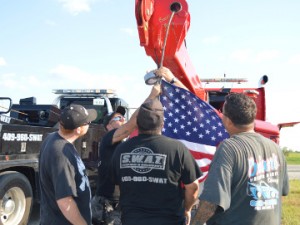 Tow truck drivers with SWAT and Brian’s Wrecker Service hoist a U.S. flag on one of SWAT’s trucks before the Slow Down and Move Over awareness event along Texas 73 near Taylor Bayou Bridge on Wednesday.
Mary Meaux/The News

Jeremy Squires, owner of SWAT Towing and Recovery, organized a Slow Down and Move Over Awareness campaign at the Texas 73 area where traffic is generally heavy and speeds are high.

Squires knows all too well the dangers associated with the job. His friend and employee Frank Amerson, 35, of Nederland, lost his life in the line of duty. On July 6, Amerson was manning a 25-ton heavy duty wrecker towing an industrial vacuum truck from Port Arthur to Houston when he pulled over to the shoulder of Interstate 10 near the Old and Lost River Bridge. A truck driven by a 28-year-old League City man struck the vacuum truck killing both men. 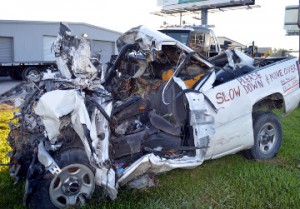 A crashed truck sits in front of SWAT Towing and Recovery at the corner of Twin City Highway and Hogaboom Road reminding motorists to slow down and move over. The truck was driven by a League City man who crashed into an industrial truck being towed by a SWAT driver Frank Amerson. Both men died.
Mary Meaux/The News

Squires acquired the mangled truck that killed his friend and parked outside his business as a reminder of what can happen.

Texas Transportation Code requires drivers nearing stopped emergency vehicles, including tow trucks, with lights on to change lanes or slow down to 20 miles per hour below the speed limit.

“In the towing industry we consider any disabled vehicle. Slow down and move over, it’s the law,” Squires said. “Today you can be a hero and let families go home safe.”

Although a competitive profession there is camaraderie among tow truck drivers when it comes to safety. Often tow truck drivers will act as blockers and place their vehicle near an active wreck scene to shield those responding. In the tow business it’s called “guardrail angels.”

Squires is working to create the “Slow Down and Move Over” association and hopes one day to speak to high schoolers about driving safety.