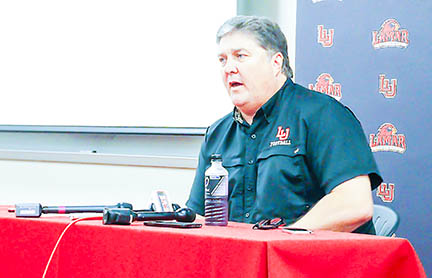 BEAUMONT — Whether or not Lamar defeated Baylor or Sam Houston State, the three-game road stretch the Cardinals are about to wind down has been very key to their season.
Lamar coach Ray Woodard acknowledged Monday winning at Sam Houston more than a week ago made this Thursday’s televised game at Southeastern Louisiana that much bigger.
“We knew it was going to be challenging starting on the road against the two conference favorites,” Woodard said. “Great opportunity to go 2-0 against the top two teams on the road with a win. That’s our challenge.”
Lamar also is going for its fourth straight conference victory overall and third straight against a ranked Football Championship Subdivision team at 6 p.m. Thursday at Strawberry Stadium in Hammond, La. American Sports Network will televise the game, airing locally on Bounce TV (KBTV-4.2, Time Warner 1248) and nationally on Altitude Sports (DirecTV 681 and Dish 413). Southeastern (2-1, 1-0 Southland Conference) hammered Lamar 61-34 last year in Beaumont, and like Lamar (2-1, 1-0), it did not play this past Saturday. The Lions still moved up a notch to No. 22 in the latest STATS FCS Top 25 poll, with Lamar just one spot out of the rankings.
“McNeese, Southeastern and Sam are all still rated in the coaches’ poll [and the STATS poll] and we’re not,” Woodard said. “What I take away from that is, a lot of the people doing the voting think when the season’s over, if they thought we would be better than them at the end of the season, they would put us up there. That’s kind of true.”
The confidence level among the Cardinals remained high through the off-week, Woodard said, although they didn’t practice as well as he would have liked early last week. For that reason, he said, the off-week might have come at a good time.
The motivation — aside from a chance for national respect — is still the same.
“It’s very much similar to the Sam Houston game in that you turn on the film and it motivates the guys,” Woodard said. “We’re in a very good place.”
The best rushing offense in the Southland Conference in Lamar’s, which averages 255 yards per game, will go up against the best rushing defense in Southeastern’s, which has yielded 75 a contest. Lamar will be tasked to create holes against what Woodard considers a deep defensive line led by seniors Aaron Price (3 sacks this season) and Ashton Henderson (1.5). In a 35-14 loss at Ohio on Sept. 19, Southeastern’s defense held Ohio to 10 yards in the first half, Woodard said. Lamar junior nose tackle Omar Tebo has returned to practice after missing the Sam Houston game with a knee injury sustained at Baylor. Woodard said Tebo could have played in Huntsville, but the coach decided to use the off-week to allow Tebo to heal more for the rest of conference play.