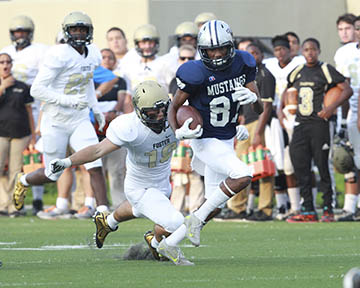 BAYTOWN — West Orange-Stark could not overcome a offensive blitz by Richmond Foster in the first half, and then turnovers haunted the Mustangs the rest of the way as they dropped a 42-14 decision to the Falcons Saturday night in non-district action at Stallworth Stadium.

Foster (4-1) proved their might with their depth and size and the Mustangs (4-1) could never get anything going on offense, especially their running game. They also coughed up five turnovers.

“We simply got beat in all three phases of the game,” said Mustang coach Cornel Thompson. “We had too many costly turnovers and they [Foster] manhandled us pretty well in the trenches on both sides of the ball. We showed our youth at times tonight and we’re still a young football team. I thought we liked some effort there late in the second half. We stressed to them that their is no reason to hold their heads down. They just need to regroup and find a way to dig themselves out of what happened tonight.”

Foster finished with 361 total yards, but only had 78 after halftime.

“Defensively, we did some nice things there in the second half,” said Thompson. “We held them a few times deep in our territory. We just could not get anything going offensively. Their defensive front bothered us all night and we missed a few catches and our running game was nowhere to be found.”

The Mustangs finished with just 207 total yards and could not find their running game, finishing with just 27 yards on 21 carries.

The Falcons piled up 283 yards in the first half, 197 via their air attack to gain a 21-7 edge at intermission.

Quarterback Alex Ramart completed 11 of 16 passes for 197 yards in the first 24 minutes. He finished just 12 of 23 for 197 yards. Cedarian Lamb hauled in four catches for 90 yards while running back Quintonio Williams had 52 yards on 12 totes. Williams ended the night with 100 yards and three touchdowns on 22 totes.

Mustang quarterback Jack Dallas completed 10 of 17 passes in the half for 100 yards with receiver Thomas Wallace hauling in three of them for 57 yards. WO-S could not get their running game going in the half as they had just 10 yards on 12 carries.

Dallas finished 21 of 42 for 180 yards with two TD passes, but had four interceptions. He was the leading WO-S rusher with 24 yards on five carries. Wallace finished with five catches for 73 yards.

Foster navigated a pair of 58-yard scoring drives in the first quarter. On their first series of the game, it took the Falcons five plays to hit paydirt. Williams had a pair of runs that went for 27 yards and Ramart hit receiver Beau Kingrey on a 29-yard pass that set up a Williams 16-yard touchdown scamper around the right end to give the Falcons the 7-0 edge.

The Mustangs answered nicely on the ensuing drive, going 74 yards in 10 plays to tie it up. Dallas passed for 68 yards on the series, the big one coming on a 37-yard connection with receiver Thomas Wallace that got all the way down to the Falcon 27.

The score came on a big third-and-goal play from the 13 when Dallas found receiver K.J. Miller streaking over the middle of the end zone for a 13-yard touchdown to even things up with 5:09 left in the first.

The Falcons responded with a quick flurry as it took them just four plays to find the end zone again. Ramart tossed a short screen pass to Williams, who turned it into a 40-yard jaunt all the way down to the Mustang 18. Three plays later Ramart teamed up with receiver Chandler Speights on a eight-yard touchdown pitch-and-catch to make it 14-7 with 4:28 left in the first.

After getting a nice 27-yard punt return by Miller down the left sideline to set up shop at the Falcon 29 with 9:07 left in the half it looked as if the Mustangs were set to tie the game up again but a turnover proved costly.

Dallas found Tokeba Hughey for a 14-yard pass to the Falcon 16. Three plays later the same two hooked again on a screen pass. It looked as if Hughey was going to take it in for the score but he got stripped at 4 and the Falcons fell on the loose leather to take over the ball with 7:17 in the half.

Ramart promptly led the Falcons on a time-consuming 18-play, 96-yard scoring drive that chewed up 6:43 off the clock.

The big plays on the march included a 23-yard pass to Speights and a 36-yard connection down the right sideline to Lamb. Williams was able to punch it into the end zone on a one-yard plunge off left tackle to push the Falcons’ edge to 21-7 with 0:41 left in the half.

The third quarter produced big defensive efforts by both teams as Foster, despite being in WO-S territory for most of the period, could only muster 20 total yards while the Mustangs had just 15.

The Falcons were able to cash in on Mustang with 9:37 remaining when linebacker Robert Limas picked off a Dallas pass at the Mustang 23 and returned it to the 14. Williams found the end zone for the third time on the night two plays later when he scored on a 11-yard dart around the right end to up the margin to 28-7 with 8:56 left.

The Falcons struck again with a short eight-play, 34-yard drive and Ramart capped it with a one-yard sneak on fourth down to make it 35-7 with 5:32 remaining.

The Mustangs kept battling as Dallas engineered a six-play, 52-yard scoring drive. Dallas completed 4 of 6 passes for 52 yards, including a 22-yarder to Malick Phillips that got to the Falcon 10, and then he found Wallace on a 10-yard touchdown strike along the left side of the end zone to trim it to 35-14 with 4:27 left.

Foster defensive back Jonathan Carbonell finished the game off with a 26-yard interception return for a score.