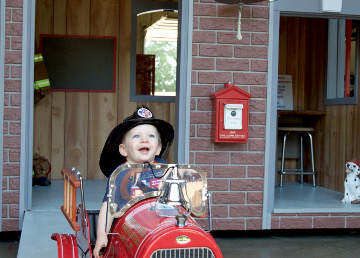 A miniature version of a fire station, complete with vintage pull handle alarm and a firefighters pole sits inside a bay at the Port Acres area fire station.

The 6-foot by 8-foot building, constructed by firefighters over a three week period and built with donated materials, will soon be on display at Parkdale Mall in Beaumont. The sale of the playhouses benefit Casas for CASA 2015. 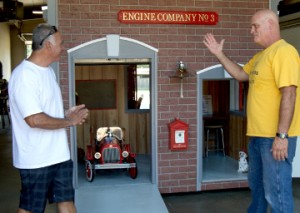 CASA, which stands for Court Appointed Special Advocates of Southeast Texas Inc. is a nonprofit, non-governmental service organization that recruits, trains and supervises community volunteers who advocate for abused and neglected children in the pursuit of safe, permanent homes, according to CASA. 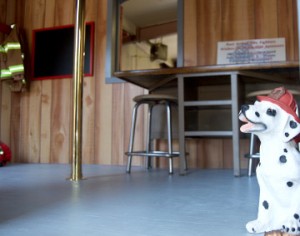 A view inside the playhouse built by Port Arthur firefighters for Casas for CASA fundraiser.
Mary Meaux/The News

This is the first year Port Arthur Firefighters Local 397 has participated in the fundraiser, Achord said.

Achord, who is a CASA volunteer, said the playhouse is a labor of love.

Richard P. LeBlanc Unit Warden Darren Wallace said his group is putting finishing touches on a playhouse that looks like the wheelhouse of an oil tanker. Staff members Daniel Sawyer, Paul Cherry and Mary Johnson had a hand in the construction and supervised the work of the volunteer offenders on the project, he said.

“We are very pleased to be given an opportunity to participate while pursuing the opportunity to reintegrate the offender into society,” Wallace said. 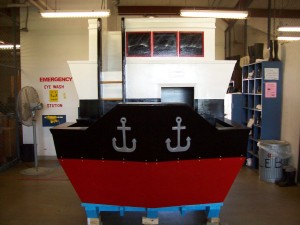 A ship replica playhouse, which was created by staff and offender volunteers at the Richard P. LeBlanc Unit, will be on view at Parkdale Mall in Beaumont as part of Casas for CASA fundraiser.
Courtesy photo

This marks the first time the LeBlanc Unit has participated in the playhouse project which Wallace called beneficial.

“We are members of the community and like to contribute and there’s no better way than to help children who are in the roughest time of their life.”

The LeBlanc Unit is a pre-release substance abuse treatment facility that houses, on average, 1,200 people. Offenders take part in a six month program then leave the unit on parole.

Christy Heisner, resource development coordinator for CASA of Southeast Texas Inc., said the event is not just about building playhouses.

“It is rebuilding the shattered lives of children who have been removed from their homes due to abuse or neglect,” Heisner said. “Volunteers advocate for these children on a daily basis so we are able to rebuild strong confident children who will one day become productive citizens of our community.”

Five unique playhouses will be featured at Parkdale Mall in Beaumont from Sept. 25 through Oct. 3.

Volunteers will be selling raffle tickets at Parkdale Mall and tickets may be purchased online this year at www.casasetx.org

The drawing for the playhouses will be at 3 p.m. Oct. 3 at Parkdale Mall.