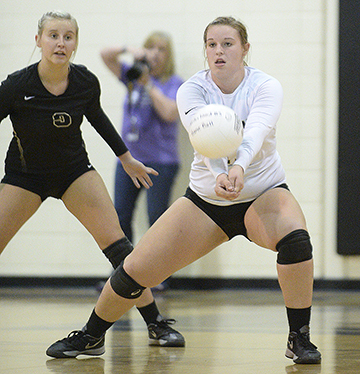 Nederland powers past PN-G in 4

NEDERLAND — Marlie Lee had her best match of the season.
Port Neches-Groves, meanwhile, might have had its worst match of the year.
It all combined toward the Nederland Lady Bulldogs defeating the Rock-A-Noos in four games. Nederland won 25-23, 15-25, 25-11 and 25-13. The Lady Bulldogs are now 4-0 in District 22-5A play and 19-9 overall. PN-G is 3-1 in the district standings and 17-6 overall.
Lee was outstanding with 16 kills, a match high, and Emma Forsythe did most of the setting up with 18 assists.
“It was for sure her best match of the season,” Nederland coach Kristin Lemoine said.
Nederland took over the match in the third when PN-G had difficulty with 14 hitting errors.
The Lady Bulldogs took a commanding 11-1 to open the match as Darcie Jones struck for nine straight service points.
It was Jones who then closed out the game with five straight points. PN-G had three straight errors to close out the game.
PN-G cleaned up the errors in the fourth game, yet it was not enough. The Rock-A-Noos had six errors in Game 4.
Abbey Montalvo got Nederland off to a hot start in Game 4 with four straight points as the Lady Bulldogs started on a 5-0 run.
When Jones came up to serve with a 17-8 lead, she struck for five straight points and the Lady Bulldogs built a 22-9 lead.
“This was a big one,” Lemoine said. “We competed and we wanted it. We didn’t give up on anything. Anything can happen in a rivalry game and that is what made it so fun.”
The Rock-A-Noos seemed to never have an answer for Lee.
“She was everywhere,” Lemoine said. “She started to struggle in the passing game but she stepped up in the hitting spots. She overcame all of it and it was her best game.”
PN-G grabbed the momentum in Game 2 and it came in the form of 11 straight service points from Libbie LeJeune. She started to serve with PN-G up 14-12 and left the serve with a 24-13 lead.
This time it was Nederland having trouble with errors. The Lady Bulldogs had eight straight errors to start LeJeune’s serve.
“This game is all mental,” Lemoine said. “It is an emotional game. I felt we had the momentum all night.”
PN-G coach Barbara Comeaux applauded the Lady Bulldogs for the match and was upset with the amount of errors from her Rock-A-Noos.
“We came back and fought after Game 1, and all I can say is you have to give Nederland credit,” Comeaux said. “We won Game 2 because we fought. We quit fighting. Nederland never quit fighting. They got their offense going, they were playing great defense and we were making too many errors. You cannot play a good team, make that many errors and win. It was nothing Nederland was doing. It was what we were doing.”
Hannah Hernandez had 10 assists for the Rock-A-Noos while LeJeune had seven kills and nine assists.
Montalvo finished with 12 assists for Nederland. Caroline Noel had eight kills and Courtney Noel had nine kills.
Also Tuesday, Bridge City won at Little Cypress-Mauriceville 25-23, 25-23, 27-25, moving to 10-12 overall and 2-1 in District 10-4A Division I.

Lots of fireworks in the Super Saturday Game at Babe Zaharias, starting with a hole in one authored by Don... read more