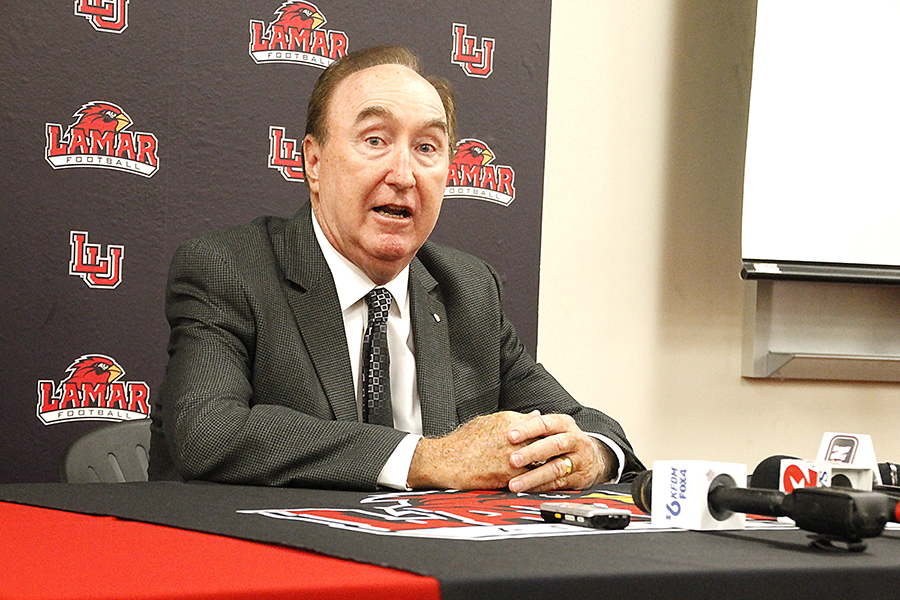 BEAUMONT — Had Jim Gilligan not played baseball at Lamar, he doubts he would have quit a lucrative position to return to his alma mater as head coach.

“I was working in the radio business in Houston,” he said, reflecting on the five years between his first and current stints leading the Cardinals. “I took a $60,000 cut in pay to take this job. I don’t think I would’ve done that for LSU or anybody else. But I played here, and this is a family.”

On Monday, the patriarch of the program for 38 of the past 43 years publicly announced his retirement from Lamar, which will take effect after the 2016 season. Gilligan said he informed players and alumni about his plan to step down beforehand.

He owns a 1,320-875-5 career record (including a 10-10 run at Western New Mexico in 1972) highlighted by 29 30-win seasons, eight 40-win marks and a school-record 54-win campaign in 1981. The six-time conference coach of the year also led the Cardinals to 10 of their 12 conference regular-season championships and appearances in 12 NCAA regionals, including three straight from 2002-04. Twice his Cards reached the regional finals, but never won it or advanced to the College World Series.

“I’m going to be 69 next month. While I feel healthy, I don’t feel as vibrant as I used to,” Gilligan said. “When you see a finish line, it’s pretty easy to run as hard as you can. So, it’s time.”

Gilligan became pitching coach for the Salt Lake Trappers in 1986 and was promoted to manager the next year, when the minor-league team broke a 68-year professional record by winning 29 straight games, en route to the Pioneer League title. His No. 29 jersey from that team is displayed in the National Baseball Hall of Fame and Museum in Cooperstown, New York.

Gilligan, a left-handed pitcher during his playing days, graduated from Lamar in 1969 and served as a graduate assistant the next year. He recalled during his first year as the Cards’ skipper a piece of advice from retired minor-league manager and major-league coach Al Vincent, who was assisting him at the time, that he said was key to his own long-term success.

“Listen, you’re a good teacher,” Gilligan recalled Vincent telling him. “In baseball, you’ll lose more games managing than you will win. It’s about teaching guys how to throw, how to run, how to field, and then you get out of the way.”

Senior righty Will Hibbs credited Gilligan’s commitment to coaching him through his college career as the reason for his decision to come to Lamar.

“I was on the fence about coming here or going somewhere else,” Hibbs said. “I called him up and said, ‘Hey, are you going to be here four more years?’ and he said, ‘Yes!’ I said, ‘Good, you got me.’

“He recruited me. He did well. He made me believe in him and the program. And here we are; I’m excited to send him out on a good note.”

Gilligan coached 133 all-conference selections, 79 major-league draftees, six major-league players and four All-Americans during his career. Among his players, Joe McCann (1976-79) made All-Southland all four years and Mike Laudig (1976-78) was honored as such three times.

Lamar athletic director Jason Henderson said a timeline has not yet been set for the hiring of Gilligan’s successor, adding that Monday was “all about Jim.” Gilligan indicated he would not have a hand in the selection process.

“It’s time for someone else, and we have capable people in our program that could take this program and not skip a beat,” Gilligan said.

Gilligan thinks he will enjoy his 39th and final season in the Cards’ dugout, which he said includes a visit by LSU to Vincent-Beck Stadium. The schedule, however, has not been released.

He warned, however, that his players had better bring their A-game.

“I don’t know if they’re going to want to play for me this year,” he said. “I don’t care if they like me or not, they’re going to give me their A-game. You can get the enthusiasm up because you only have nine months of it, and three of those months are of a competitive nature, and most of that is stuff we’re really going to enjoy.”