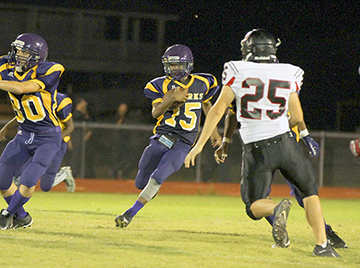 Shortly after Sabine Pass scored a touchdown to close the first half, Hull-Daisetta linebacker Austin Brewer had to turn his attention to his school band’s halftime performance.
He’s one of the band’s drum majors.
“We completely forget the past,” Brewer said. “They do something, we forget about it and we just move on. Our team Bible verse says: ‘I’m still your brother. Even though I’m not all I should be, I’m bringing all my energy to prepare for this one thing, forgetting the past and looking forward to what lies ahead as I strain to reach the end of the race in which God is calling us.’
“We live off that Bible verse.”
After halftime, Brewer and the defense went back to work.
He turned two fourth-quarter fumbles into touchdowns to go along with a pick-six he had late in the first half, helping the Bobcats erase a 20-12 deficit and escape Sabine Pass with a 30-20 win Friday night. As a team, Hull-Daisetta (1-2) had three defensive scores on the night.
“I was expecting at least a couple of tackles, but I wasn’t expecting anything like that,” Brewer said. “That surprised me even more than anything else.”
The loss extended the Sharks’ losing streak to 11 games, dating back to Week 4 of last season. Yet, for the second week in a row, their hopes of ending the skid came down to a potential game-winning drive.
“We get closer every game, and yet every game we look for improvement,” said Sabine Pass coach Trey Harvey, his team’s hopes for a win dodged in the final 2 minutes last Friday at Lutheran North, 21-13. “Honestly, we get a little bit better every time. We keep closing that gap to where we think we can be successful.”
A busted exchange on a reverse attempt resulted in a fumble, which Brewer scooped up and returned 30 yards to all but seal the victory with 51 seconds left. Hull-Daisetta took its first lead of the game with 7:27 left after Brewer, as an offensive lineman, recovered a Dalton Robinett fumble and carried it 35 yards to complete a 55-yard play.
“We’ve got to quit making mental mistakes,” Harvey said. “I told the kids, we should’ve run the ball. They played their tails off. I’m proud of them, and we’re going to regroup next week and try to take it to West Hardin.”
Brewer’s first score came with 43 seconds left before halftime on an 80-yard return of an interception off Dominique Wilson. The failed two-point conversion preserved a 7-6 Sabine Pass lead, and the Sharks (0-4) extended their advantage to 13-6 after Wilson’s 33-yard heave to Jamyus Jones in the back of the end zone.
That was one of Jones’ five catches for 78 yards in the game. His second catch, a 34-yard scoring heave from Wilson, began the second quarter and opened the scoring.
Wilson battled through injury and completed 5 of 9 for 91 yards and the two scores.
Sabine Pass relied on its run defense to keep H-D’s offense scoreless in the first half despite seven first downs.
“Our defense played well, but we have to execute better on offense so we don’t put them in position to be on the field so much,” Harvey said.
Wilson, who also rushed nine times for 34 yards, gained 6 of those on a touchdown late in the third quarter to make it a 20-12 lead. Sabine Pass, which had a 49-yard touchdown run called back for an illegal block in the third quarter, forced another Hull-Daisetta punt. But Aaron Taylor recovered a dropped lateral pass and took it back 30 yards to narrow the deficit to 20-18.
From there, Brewer saved the day.