Class 5A No. 3 Longhorns rush past Titans 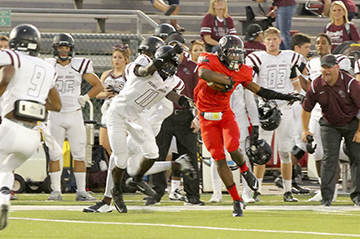 Kenny Harrison’s message to his Port Arthur Memorial Titans after the team’s 35-7 loss to Richmond George Ranch was simple — forget Friday and move forward.
The Titans (1-3) coughed up the football twice and threw an interception in the first half and never recovered in losing to the Class 5A No. 3 Longhorns at Memorial Stadium.
George Ranch (4-0) rode the legs of Darius Anderson, as the senior running back rushed for 194 yards on 32 carries. Anderson scored four straight touchdowns, starting with 8:53 left in the second and his last coming with 10:10 remaining in the game.
“That is a good football team,” Harrison said. “You can’t turn the ball over three times and expect to beat a team like that.”
George Ranch forced a fumble only three plays into the game and Longhorns linebacker Brent Ugo recovered the ball. It came after Memorial running back Marcus Younger broke free for a 13-yard gain.
The Longhorns went to work and the team’s first scoring drive ended on a fourth-and-23 pass that resulted in a 25-yard touchdown strike from quarterback Antonio Jackson to Joshua Scruggs. Jackson finished 9-of-12 passing for 128 yards with no interceptions.
Even though the Longhorns passed the ball 12 times, George Ranch did most its damage on the ground.
George Ranch totaled 427 yards of offense, 299 rushing and 128 passing. Alex Fontenot had 81 yards on the ground on eight carries.
The lone blemish for George Ranch was the team was flagged 10 times for 85 yards.
After the touchdown throw, Anderson then scored his four touchdowns as George Ranch eventually led 35-0 early in the fourth.
It was not until there was 5:15 left in the game when Memorial put points on the board.
Second-string Titans quarterback Kevin Williams, who played the entire second half, scored from 6 yards out to make the final score.
“They (Longhorns) capitalized on three early turnovers,” Harrison said. “We dug ourselves a hole and they capitalized. That is what a good football team does. Our kids played extremely hard.”
Harrison said the plan all along this week was to use both Kadon Harrison and Williams at quarterback to give both guys some snaps heading into next week’s District 21-6A opener at Channelview.
“The plan was to rotate Kadon and Kevin the entire game to give them some snaps,” Harrison said. “The plan was to give Kevin the bulk of the snaps in the second half and that is what we did. We wanted to give Kadon some snaps in the first half to get into a rhythm with his teammates. The key thing is we walked out of this without any injuries.”
Kameron Martin rushed for 63 yards on 15 carries to lead the Titans, who had 141 yards rushing on 31 carries. Memorial picked up 213 yards of total offense.
Marcus Younger added 51 rushing yards on nine carries, and De’Andre Angelle led the Titans with two catches for 54 yards.
The main focus for Harrison now is the fact his team is 0-0 in the district standings and facing a very dangerous Channelview squad.
The Falcons have not changed much from the team last year that put up more than 700 yards and 70 points on the Titans in Port Arthur.
“I will be honest; I have been looking forward to the Channelview game,” Harrison said. “Last year they came out and took it to us. We have to get back to work and what people need to understand is, it is a new season. I am a fighter and my team will fight. So many people get down on what is going on, but I will fight until the very end. Each week we come out to win. I am disappointed in myself for tonight’s loss but I understand tomorrow we are 0-0. I don’t care what anybody says because we are going to fight our behinds off.”