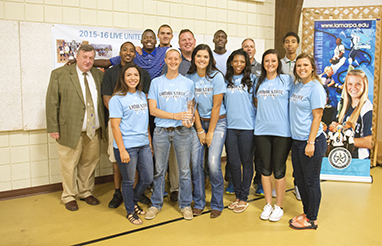 Giving back to the community was on the menu early Friday during the Live United Honoree Breakfast and Campaign Kick-off for United Way of Mid and South Jefferson County.

More than 100 people gathered at Port Arthur’s United Methodist Temple to recognize the Lamar State College- Port Arthur Seahawks athletes for their service to the community and the positive role models they are to the area youth.

More than $1,000 was raised during the breakfast to kick-off the service organization’s goal of raising $1.2 million during the 2015-2016 United Way drive.

“We are a team united for our community, and we are about giving back to our community,” Janey Johnson, United Way of Mid and South Jefferson County director, said.

Proceeds from the 2015-16 drive are used to financially assist 18 local charities and programs.

For the first time this year, contributions may be made via text. To utilize the Text to Give program enter the number 41444 and text the word Pacesetter, the amount and the contributors name.

“Hunger is real here in our community, but your support allowed 137,927 meals to go to the hungry,” Fletcher said.

This year marks the 90th anniversary for the United Way of Mid and South Jefferson County, Johnson said.

This year’s Live United honorees, the Seahawks, were honored during the luncheon for their giving spirit both on and off the field.

“They serve as an example of what it means to be united,” Fletcher said. “They work, learn and play together.”

The athletes volunteer throughout the community through food drives, cancer awareness, nursing homes, and much more.

“Throughout the year we try to instill a sense of volume that will last a lifetime. We want to give back to the community,” Scott Street, Lamar Port Arthur director of athletics, said. “