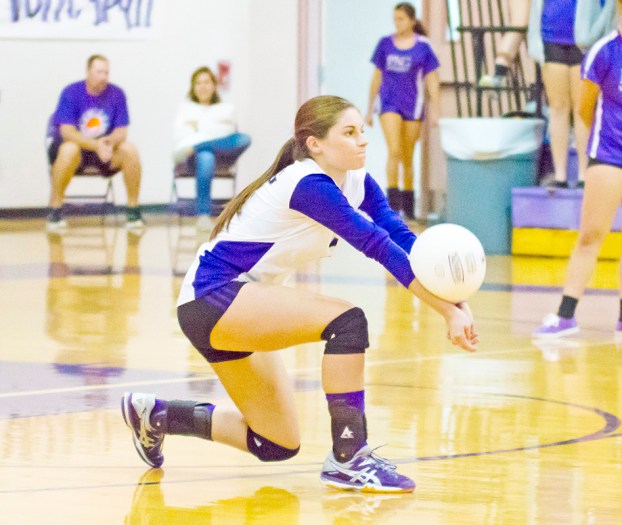 PORT NECHES — It certainly was not the prettiest match ever for the Port Neches-Groves Rock-A-Noos, yet it ended with a win.

The Rock-A-Noos defeated the Lumberton Lady Raiders Tuesday night to improve to 16-5 overall and 2-0 in District 22-5A play.

“Lumberton came out and played hard,” PN-G coach Barbara Comeaux said. “We took control at the end of the third, but it could have come out either way. They were playing great defense in the first two games and we were not reading our defense. We made a few adjustments and we got a little bit better and a little bit better.

“I had some kids step up tonight. My setters did a good job passing to the hitters and we started doing good on pass-receive.”

Everything went right for Lumberton (0-2) in the first game. PN-G fought back and took control of the second and then looked its best in the third game.

hitting the ball and settled for many drop shots.

Comeaux did not look pleased with the team and called several time outs.

“They (Lady Raiders) handled our serves and they kept it in play,” Comeaux said. “We seemed like we were a half step off. Once we started playing and going for all the balls we came around. I think we were a little uptight, not making any excuses. You can’t do that and beat good teams.

“I am so proud of our kids. It is tough. This district is going to be tough. I think a couple were off and a couple kids stepped up.”

Hannah Hernandez and Libbie LeJeune each had great all-around matches as both finished with eight digs and 21 assists. LeJeune added 11 kills.

Emily Taubert had 19 service points and 21 digs, Jessica Harper had 17 digs and Jade Weatherford finished with a team-high 16 kills.

Laura McCutcheon had 11 kills and Kailey Oliver had eight kills and five blocks.

PN-G returns to action Friday back at The Reservation against Beaumont Central.