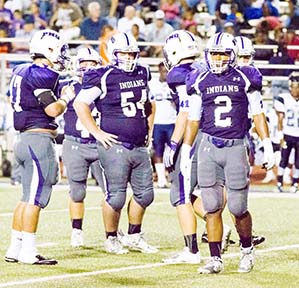 Coach Brandon Faircloth said his linebacker was far from having butterflies in his stomach four years ago against Beaumont Ozen.

Either way, Rembert started his first game against the Panthers, and on that night he led the Indians in tackles.

“Maybe that is why I did so good,” Rembert said of the nerves. “I wasn’t thinking about anything and just went out and played.”

Rembert has started four years for the Indians and was named to the Port Arthur News Super Team a year ago as a junior. He posted 136 tackles last year with 23 quarterback pressures and five pass breakups.

His productive season was not a fluke. Rembert as a sophomore had 134 tackles, three fumble recoveries and three pass breakups.

“He stepped in and he has always had a great maturity about him. He is an all-around good football player.”

Rembert said: “I haven’t thought of how I have started all four years. I just play one season after the other and just play football. I was scared and nervous as a freshman. That first game I just reacted that night against Ozen.”

The last time the Indians were on the field, they lost 28-14 to Class 4A No. 3 West Orange-Stark. Rembert was on the sideline and was very vocal with his defensive teammates.

“Someone has to take charge and that is me after being on varsity for four years,” Rembert said. “That is my job and I am going to do the best I can do.”

Faircloth has enjoyed watching No. 2 grow as the leader of the PN-G defense that has placed second over the last two seasons in District 22-5A according to yards allowed.

“He is very local and he has really come of age,” Faircloth said. “I think during his sophomore and junior years, he was a key part of our team but he really didn’t have to be the leader because we had seniors ahead of him that took that responsibility. Now he is a senior and he is doing the same things. He holds people accountable and makes sure we are doing the right things.”

Rembert is not a born-and-raised PN-G student. He moved to the district his fifth-grade year from Beaumont and he was quickly introduced to what it is like to be an Indians player.

“I remember coming here and everyone was saying I was going to be the running back and talking about football, and to be honest I didn’t know PN-G had football,” Rembert said. “I still thought Port Neches-Groves was one city.

“Playing for Port Neches-Groves is great. I wouldn’t want to play anywhere else. The fans are amazing. Our scrimmage, the stands were full. It is crazy.”

The Indians start district play in two weeks on Thursday, Sept. 24 at Baytown Lee. Rembert does want to win the District 22-5A title, yet he has a bigger goal in mind for the Indians in 2015.

“I want to make it farther than one round in the playoffs,” Rembert said. “That was really disappointing last year. The district championship is a big goal, but honestly I am just trying to make it past the first round. That is what I want to do.”