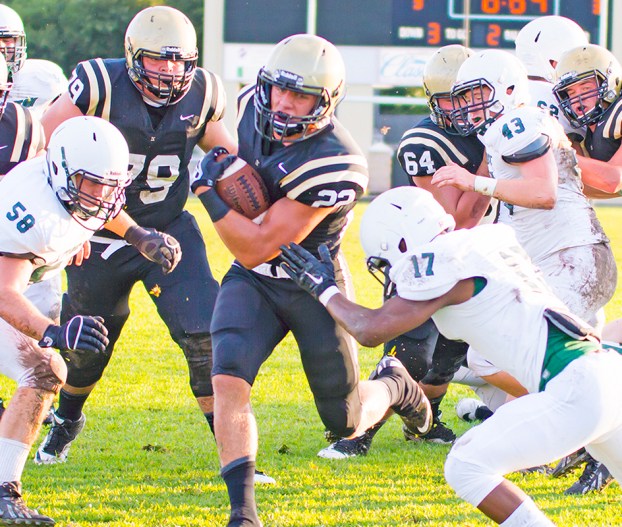 NEDERLAND — If Austin Krautz had to choose between watching a big football game and shooting his limit of ducks, do not be surprised when the Nederland star picks the latter of the two.

Krautz loves playing the game of football and he has become really good at the sport over the years at Nederland. No. 22 in the black and gold simply has other things he would rather do in his free time.

His father, Johnny Krautz, at times wants to know the ins and outs of the Bulldogs team. Austin does not run home and give his father the inside information. His dad has to drag the information out of him.

“I don’t talk much football at home,” Krautz said. “My dad likes to ask a lot of questions and I only give him a few answers. I am not sure where that comes from.

“I never really enjoyed watching football when I was growing up. People always ask me what my favorite teams are and I can’t give them an answer. I don’t really have one. I love playing the game and I watch a little more football now than I used to, but I can’t say I sit down and watch an entire football game.”

So what does a football star like Krautz do in his spare time?

It is unofficial, but it would be hard to imagine another Bulldogs player who has shot more deer and ducks and caught more fish than Krautz during his time on the roster.

Johnny Krautz said his son has shot more deer than most men and took his first one when he was 8.

Still, Krautz can easily remember his first touchdown in tackle football. He was around 8 and he fell off a jungle gym and broke his arm.

“I slipped off and it snapped,” Krautz added. “All I was worried about was if I could still play football.”

His father said Austin was then playing receiver and was out making catches with a cast on his arm.

“I couldn’t believe it when I scored a touchdown,” Krautz said. “That was my first touchdown ever in tackle football. I was pretty excited.”

Nederland coach Larry Neumann applauded Krautz for upholding a Nederland-football family tradition. Austin’s father played for the Bulldogs and so did his uncle.

“He was brought up a Bulldog,” Neumann said. “Austin is a very serious guy and a serious leader. He will not tolerate anything but the best from himself, even in practice. When something needs to be said, Austin will say it, but he isn’t out there running his mouth.”

There has been a lot to be impressed with about Krautz and one thing stands out in Neumann’s mind as the biggest improvement from his junior to senior year.

“I have noticed he is more committed to finishing his runs,” Neumann added. “When someone goes to tackle him, he makes it a point to deliver his own blow. That goes to his mindset.

“We try to put the ball in his hands as much as we can and he will continue to get a great load of work. He is a fine young man and I am glad he is a part of our football team.”

Johnny Krautz said: “Words cannot describe how special it has been to watch Austin on the ball field. Nederland has been a great program and he has loved playing for Neumann and company. Austin is a natural at football and has been given a lot of God-given talent. He dreams to play at the next level. He is not very vocal and tends to let his play speak for itself. That is how he has been a leader throughout his career and that is to lead by example.”

Feral hogs are typically black but they can come in a variety of colors. Reddish brown is fairly common and... read more