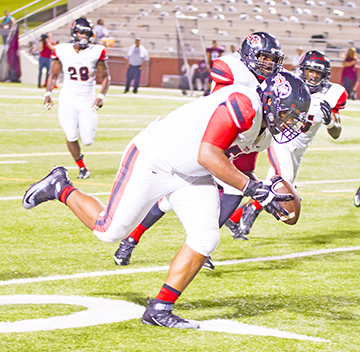 By Tom Halliburton
The News Sports Correspondent
BEAUMONT — Act II contained absolutely no resemblance to last week’s opening scene in Port Arthur Memorial’s 2015 football season.
If the Titans seemed uptight, defenseless, and always facing an uphill battle with Beaumont Ozen, they totally reversed those specifics in the Thomas Center on this warm Saturday night.
Memorial never trailed, forcing five first-half turnovers and playing impressive defense in a 24-7 victory over Beaumont Central.
The Titans (1-1) unleashed their inner recklessness on the Jaguars (0-2), harassing Central early and often to the delight of head coach Kenny Harrison and his staff, especially second-year defensive coordinator Gary Jessie.
Seniors Brandon Artis and Brandon Jackson lived up to their statures. Little Kary Vincent played his heart out. A Mack truck named Odis Mack applied some hard knocks and a junior named Jacorien Barnes arguably applied the knockout punch midway into the second quarter.
“I thought our defense played extremely well,” Harrison said. “We talked about creating turnovers and we had to contain [highly regarded Central tailback Devwah] Whaley.”
An outstanding runner, Whaley busted free on a 42-yard counter to tie the game 7-all late in the first quarter and carried 25 times for 115 yards.
That’s the night’s closest statistic to offensive production. Central led in total yards, 235-192, and first downs, 11-10. Big deal. When it came to big plays, the Titans delivered.
It’s the first time Memorial’s defense kept an opposing attack under 300 total yards since the Titans limited Central to 228 last year. Central mentor Toby Foreman understandably placed the blame for this loss on turnovers.
“Five turnovers in the first half,” Foreman said. “You can’t beat anyone’s B-team with that.”
Foreman could not have been that impressed with video of Memorial’s defense against Ozen. Neither was the Titans defensive coordinator.
“The main thing we wanted them to do was line up correctly and get very physical at the point of attack,” MHS coach Jessie said. “We always say when you get three turnovers, you’ve got a good chance and when you get four, you’re going to win.”
Vincent lunged to snag a deflected ball and end Central’s first possession. Kadon Harrison and Rickey Thomas teamed for a 59-yard scoring bomb on the next snap.
Harrison faked to Kameron Martin and scored early in the second quarter to give the Titans a lead for keeps. Two Jaguar penalties greatly assisted that 61-yard scoring drive.
Barnes’ knockout punch gave Memorial a 21-7 cushion in the form of a 34-yard interception runback. Vincent created the pressure before Central’s QB released his ill-advised pass.
When James Kittler recovered a fumble on the ensuing kickoff, Memorial was ideally situated for a 28-yard Raul Estupinan field goal to wrap up the points with 3:30 left in the half.
The Titans have little time to celebrate. They play again Thursday night against Houston Lamar in Delmar Stadium at 7 p.m.