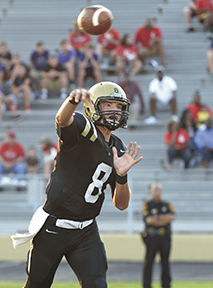 These two teams have played 19 times through the years and it all started back in 1930. The first time the two programs faced off, Dayton’s Broncos pounded the Bulldogs 66-0.

“Dayton is a prideful program that we have a large amount of history with through the years,” Nederland coach Larry Neumann said. “We know they will be enthusiastic about playing us and we look forward to playing the Broncos.”

Neumann said the Bulldogs have not put too much stock into the scoreboard from last week’s Dayton game. Channelview defeated the Broncos 57-21 on the performance of Alabama commit Jalen Hurt.

The Falcons quarterback threw for 219 and rushed for 146 yards with a combined five touchdowns.

“It was a close game until the Hurt kid took over,” Neumann said. “He will do that to a lot of people this year.”

What Neumann has taken notice of is the fact that this Dayton team likes to hit their opponents in the mouth.

“Dayton will hit you,” Neumann added. “It is in their history. They are very much like a West Orange-Stark. We look forward to the matchup because Dayton, like Crosby, is going to be a playoff team.”

The Broncos, against the Falcons, put up 245 yards with 100 coming on the ground and 145 through the air. Quarterback Hunter Hancock had 121 yards on 10-of-13 passing with two touchdowns. Jalen Styner led the Broncos with 61 rushing yards on 15 carries.

“I expect an old-school, get-after-it type football game,” Dayton coach Jowell Hancock said. “We have had some real great games against Nederland through the years.

“We have to cut down on missed assignments. You can’t miss 36 tackles like we did last week. There were times we could have got off the field and you can’t give a team like Channelview that extra chance with the football.”

The main focus of the Dayton defense figures to be keying on Nederland senior running back Austin Krautz.

Krautz finished the Crosby game with 124 yards rushing on 14 carries and a touchdown and added 49 yards on three receptions.

Nederland quarterback Mitchell LeBaron had 175 yards on 14-of-30 passing in his first varsity start.

“We are also upset with ourselves after giving up 57 points last week,” Hancock said. “We let other people make excuses. The more physical team last week was Channelview. Nobody should make you look that bad. We always put a lot of stock in our defense and we didn’t do our job.”