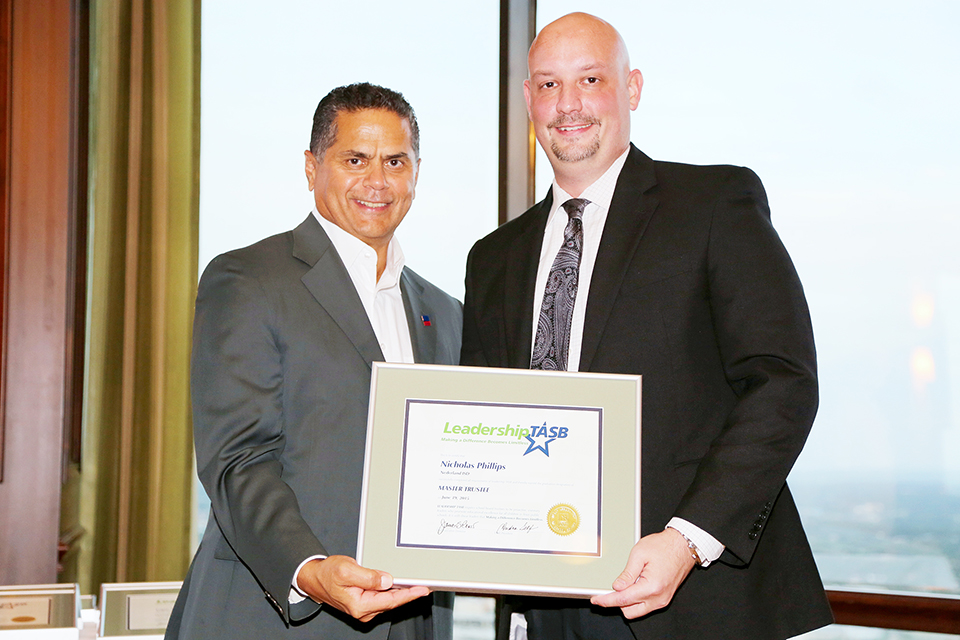 The 12th grade associate principal’s office incorporates a healthy mix of school memorabilia honoring his career in Beaumont ISD and his public position with his alma mater.

Phillips, 36 of Nederland, said he was honored to explore and further merge both facets of his relationship with Texas public school districts during the Leadership Texas Association of School Boards 2015 — a 10-month research program Phillips completed this summer, along with 34 other trustees from across the state.

At the Leadership TASB 2015 graduation ceremony June 19, Phillips was awarded the title of “Master Trustee” — the highest designation recognized by the state.

“To be a Master Trustee — it’s a privilege to have the title, and I feel appreciative that Nederland ISD allowed me to participate,” Phillips said in his West Brook office Aug. 13. “I feel I benefited not only in my elected position as a Nederland ISD trustee but in my professional career within a school district, as well.”

Phillips said of his graduating class, he was unique — the only one actively working for one district while serving on the school board for another.

“During the course, we went all over this state, visiting districts and campuses to see what they were doing that worked and what were some solutions to common problems they’ve come up with,” Phillips said. “I think I approached the visits differently than some of my classmates, because I would look for things I could bring back not just to Nederland ISD but here at my campus, too.

“During the conferences themselves, each trustee was in charge of bringing in ‘Hometown News’ — something unique about your district — to share with everyone else. Between the ‘Hometown News’ ideas and our actual campus visits, I know I brought back ideas to present to the Nederland board and to my fellow administrators at West Brook after each session.”

Phillips said he and his classmates spent most of their time developing extensive group research projects.

“The group project was probably the most fun and the most stressful,” Phillips said, with a laugh. “At the end of the course, you present to a panel of judges to determine which groups will present at the state TASB conference in Austin this October.

Phillips said one of the most important takeaways from his group presentation is for districts to create classroom environments with students and teachers — not just trustees and campus administrators — in mind.

“When we were in school, all the classrooms were set up in rows — but not all kids learn sitting in rows,” he said. “So trustees have to be mindful that when you walk into a school, you may see kids sitting on the floor or with their desks arranged in groups — or you may see kids in a lounge area the teacher has set up inside the classroom. All kids learn differently, and teachers today are working very hard to create these different learning environments.

“The other big takeaway, with regards to the technology aspect, is we’ve got to keep funding from the state and locally to stay ahead of all the advancements. Many times boards and districts are falling behind. By the time they have the dollars to invest in a product, it’s outdated. But you can stay with the game and maybe even get a little ahead by providing enough infrastructure to support personal devices the students bring in — no matter what those might evolve into — as well as providing tools through the district.”

Phillips said he’s relayed condensed versions of his group project to both the Nederland ISD board of trustees, of which Phillips served as 2014-15 president, and to administrators in Beaumont ISD.

Phillips will rejoin his group in October to present “Are You Smarter Than a Legislator?” at the state TASB conference in Austin.

For more information about TASB or the annual leadership course, visit www.tasb.org.