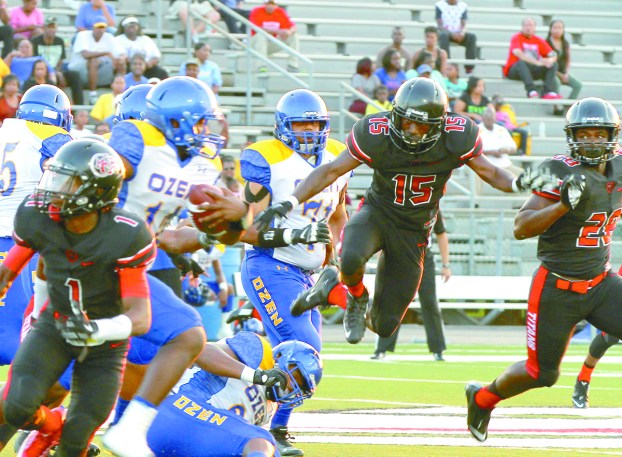 The history that Port Arthur Memorial and Beaumont Ozen share on the football field only dates back to 2006, but for nine years it was history that told of Memorial’s success and nothing else.

Being outscored 70-0 by the Titans the previous two years was enough reason for many to believe the Panthers would at best keep up with their nemeses. It was also enough of a chip on the Panthers’ shoulders.

“We talk about 56-0 [the score last year], well, I know that was in the mindset of these kids,” second-year Ozen coach David Suggs said.

Instead, Memorial was the one giving chase for all but 8 minutes of both teams’ 2015 opener Friday. In the end, Ozen’s 31-30 victory in Port Arthur symbolizes the continuation of opposite directions for both teams.

The Panthers started 0-4 last year before going 4-2 to get into the 5A playoffs and have now won five of eight. The 6A Titans have dropped eight of nine after starting the 2014 campaign 2-0.

Still, in Memorial coach Kenny Harrison’s mind, it’s only the start of a season, and he reminded his team of that after Friday’s defeat.

“We’ve got to be ready to go once district hits,” Harrison said, his District 21-6A slate starting Sept. 28 at Channelview. “This is just one game, so we’ve got to put it behind us and move forward.”

Memorial wide receiver De’Andre Angelle, otherwise, was having the game of his high school career. The junior, who only had 12 yards on three receptions last fall, caught three touchdown passes from Kadon Harrison and nine passes total for 150 yards.

In true breakout fashion, Angelle gave the Titans a 30-24 lead with 2:02 remaining, shaking off two defenders on his way to the end zone on a 45-yard touchdown play that was a conversion of fourth-and-3. The hosts had heeded Kenny Harrison’s call to play their brand of football for the second half after being down 15-7 at halftime.

Yet, it was that first minute of the game that stunned the Titans early. That was when linebacker Markel Perry returned an interception 31 yards for the Panthers’ first score.

Kenny Harrison said he saw Ozen change from a two-high safety defense to a Cover-3 before the snap but had his offense stick with the play call.

It wasn’t all the Titans were left to rue. Still down 7-0 late in the first quarter, they dropped two passes in the end zone to turn the ball over on downs, although the intended receiver on one of the attempts had to make a play against tight double coverage.

But on a night when many eyes were on the Memorial backfield duo of Kameron Martin and Marcus Younger, who combined for 133 rushing yards, Angelle had stolen the show — before Ozen quarterback Josh Boyd spoiled the night with his nearly 2-minute drill from 71 yards out, ending with a 3-yard stretch into the end zone with 9 seconds left.

PN-G prepared for 6A Clear Lake

PORT NECHES — The last time Port Neches-Groves and Clear Lake stepped on a field together, the Indians had a quarterback... read more