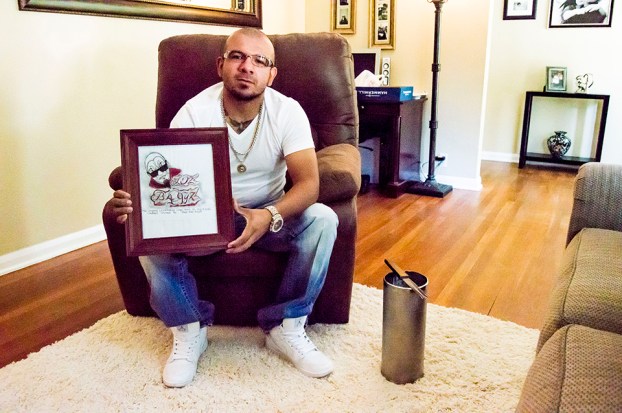 Jose Ray Riojas shows the first hand-drawn sketch that evolved into the logo for his production company, Loz 409 Boyz, next to his guiro — a Latin percussion instrument he uses to make traditional Cumbia music — at his Port Arthur home Friday.

The 30-year-old Port Arthur native still laughs and smiles like a schoolboy when he thinks about the day he met his wife, Sylvia. His voice is boastful when he says of his five children, his youngest — the only girl in the bunch — is the most authoritative, the most aggressive. He likes that “the queen” of the house is instilling strength into their “baby girl.”

But the percussive rhythms in Cumbia, a genre of Latin American music akin to Salsa, grabbed Riojas as a boy. He said he couldn’t walk by a table without pretending it was a drum kit. Anything he could scrape could quickly become a makeshift guiro — a hollow instrument with outside ridges that produce a sharp, ratchet-like sound when rubbed with tines or a stick.

“Cumbia is in my blood,” Riojas said in his Port Arthur home Friday, laughing. “It’s a distinct Latin rhythm music very popular in the Hispanic culture. It’s the kind of music that grabs you.

“As far back as I can remember, I would turn anything I could get my hands on turned into an instrument. It’s my roots. My dad was from Palaú, Coahuila — a small little town in northern Mexico, a lovely town. I was born in Port Arthur, but we actually have a lot of people from Palaú living here. I always loved that I still got to grow up in this type of music.”

Riojas said he started producing Cumbia music for other bands in 2006. But after six years of collaborating and producing albums to meet others’ approval, he decided to take a break and work on his own sound.

He started his own production company, Loz 409 Boyz, in 2012 and for the last three years, has worked with artists and producers in Port Arthur, Houston and his father’s hometown of Palaú to make an album of his own. 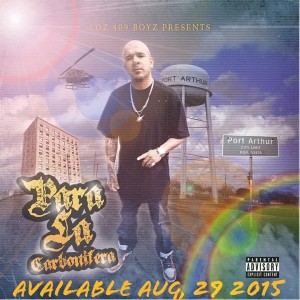 “In Palaú Coahuila, they produce energy with carbon from black coal, and there have been a lot of miners who have lost their lives getting that black coal to use. I’m dedicating this album to the miners who have died and the ones still working, in and out of those black carbon mines every day making a living to support their families,” Riojas said. “As producer for myself this time, I did it all. I would leave almost every weekend to go work on my album. I put all my heart and soul and dedication into this.

“All the ideas — it’s my own taste. It’s not like what I did with other bands where it was more of a collaboration or I just did what they asked for. With this album, it’s my own. It’s all about what Ray would want in an album. And I’m going to be very proud to show it off tomorrow.”

“But the heart of Cumbia,” Riojas added, “comes from the guiro. It’s the single instrument that gives the sound, the soul, the feel of Cumbia. It’s gives out a very sharp, edgy sound, and you can play it all different ways.

“Some people around here may be more familiar with it in Cajun music, but theirs doesn’t look like this. Instead of the hollow (cylinder or gourd), they flatten it and turn it into more of a vest. They prop it (the washboard) against their stomachs and scratch it.”

Riojas said he hopes all of his “friends, foes and fellows will come out and support” his Cumbia movement this weekend for the album release party.

“This is something I’ve always wanted to do. I’ve spent years planning my future, and I consider myself a successful individual. I’m living my dream right now,” Riojas said. “I’m excited to go on stage after three years away tucked away, just in the process of making the album.

“I’m excited to give the people the music they want. You’ve got to have the support from the people, and you’ve got to make good stuff to be blessed. I’d like for people to come support me in this movement and hopefully everything will be successful.”

All adults 18 and older are welcome to the B.Y.O.B. event. A cover charge of $10 for men and $5 for women will be requested at the door.

Copies of “Para La Carbonifera” will be available for $12.

After hearing opening statements in civil case to stop construction of a Port Arthur housing complex for the elderly,... read more