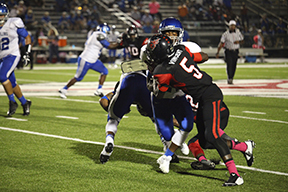 If there’s one thing Port Arthur Memorial coach Kenny Harrison learned about last year’s Beaumont Ozen team, the Panthers improved each game following their 56-0 defeat.
“Just like everybody else, your main focus is just to continue to get better,” Harrison said.
Although the regular season begins Friday night for both teams at Memorial Stadium, the Titans — who limped to a 3-7 record in 2014 — have a starting point from where they can progress.
Their only dress rehearsal came last Friday at Atascocita, which by score was a 28-14 loss for the Titans. But, like any scrimmage, Harrison picked up plenty of information about his bunch.
“The one thing we took from Atascocita was that all the mistakes we made were correctable,” Harrison said. “We made some mental mistakes. They were all correctable.”
Yet, it was the first time, Harrison stressed, the players were on the field by themselves in a game situation, and they were “that much further ahead” than those that have coaches on the field in certain phases of a scrimmage.
“The scrimmage wasn’t all that bad,” Harrison said. “After watching the film, I was real positive about the direction the football team is going in.”
Ozen won four of its final six ballgames last year to slide into the 5A playoffs in coach David Suggs’ first season, so the Panthers took steps in the right direction while the Titans, who were beset by key injuries, did not fare well in District 21-6A.
It was all a matter of sticking with the game plan, Suggs said.
“We had to focus on that and keep kids in the mindset that this is our plan and this is what we’re going to do,” Suggs said. “Now, most of these kids having a year under their belt, it helps with basic experience.”
Friday night will be an opportunity for both teams to show how they’ve grown and the first opportunity for both offenses to sparkle.
On Memorial’s side, there’s the Baylor commit Kameron Martin, whose 903 total yards (5.9 per carry) ranked third among non-seniors last year. Senior classmate Marcus Younger is also a big threat out of the backfield.
Ozen’s new 40 Front (four-man front) defense will try to be more effective in stopping Memorial’s run this time around, but slowing the ground game isn’t Suggs’ entire concern.
“If you spend too much time focusing on them, you can forget about the four guys that can hurt you,” Suggs said. “We’re focused on an overall approach, not focus on one guys and then have to turn around and focus on another guy because one guy’s killing you.”
Ozen isn’t without playmakers, either, as senior quarterback Josh Boyd totaled 1,532 yards of offense during the regular season last year. He was 22 yards shy of 1,000 passing, and he matched the rushing total of now-junior Calvin Tyler.
“They’re very athletic with a lot of team speed,” Harrison said. “That’s Ozen’s strength. Anytime you have a returning starter at quarterback, you’re always going to have a chance to be pretty good.”