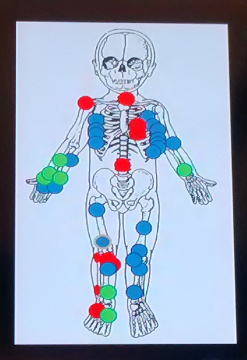 A skeletal survey of Faith Mason taken on Aug. 30, 2013 at Texas Children’s Hospital in Houston. The blue dots represent old fractures, the red dots represent new fractures and the green dots represent fractures that weren’t clearly noted when the child was admitted Aug. 18, 2013.

BEAUMONT — Dr. Reena Isaac, a pediatric specialist in child abuse at Texas Children’s Hospital in Houston took the stand in the third day of testimony in the trial of Christine Johnson.

Johnson, 22, is charged with severely abusing her then one-month old daughter Faith Mason from an incident occurred in August 2013.

Isaac stated “Baby Faith’s” condition was quite grave when she saw the child in the intensive care unit on Aug. 18, 2013. At that time the child had a number of soft casts on her extremities, a cervical collar to immobilize her neck, various tubes monitoring her vital signs and was breathing with the aid of an endotracheal tube.

Baby Faith was found to have more than 40 fractures, some of which were two to three weeks old and trying to heal. One particular injury in the many she suffered — broken hand and fingers, pointed to child abuse.

“It is highly indicative of child abuse,” Isaac, whose duties at the hospital include consulting on cases of suspected child abuse, added that children of this age cannot roll, crawl or walk and even if it were just the hand injured that alone would point to child abuse.

Prosecutor Randi King asked Isaac how many cases of child abuse does she see per month. She answered “between 30 to 40.”

“So, after eight years of this type of work were you shocked/” King asked.

“Yes,” Isaac answered. “This was a very unique case due to the age of the child and the number of injuries in a non-mobile infant.”

One set of x-rays was taken on the day she was admitted to Texas Children’s Hospital and a second set taken Aug. 30, 2013. Isaac said the reason for the second set two-weeks later was to compare with the first and possibly show areas that may have been missed such as ‘hidden fractures.’

Isaac pointed out the seven bones in the neck explaining they are labeled C1-C7. The infant suffered a complete break in both C2 and C3.

The physician believes the break occurred when the infant was jerked causing her neck to hyperflex or ‘go back further than it should.’

King referred to an earlier viewed video taken of Johnson at Christus Hospital-St. Mary when she brought the infant in for treatment. In the video Johnson admits being mad and jerking the baby out of her bed because the baby woke her up early in the morning.

Johnson then demonstrated the jerking motion using a piece of paper.

The comments from the mother, Isaac said, are consistent with the baby being jerked and with the injuries.

Fractures to Baby Faith’s rib area likely came from squeezing or grabbing the infant around the chest while other fractures such as the ones to the femur/thigh bone and humerus/upper arm bone, came from twisting or being shaken and flailed.

The infant also suffered brain injury as shown in CAT Scans including subdural hemorrhage and swelling which was pushing the brain to the right side.

Baby Faith, born July 13, 2013, is currently living in a therapeutic foster home out-of-town and is developmentally delayed. The extent of the delay is not fully known at this time.

Christine Johnson, now 22, is charged with two counts of injury to a child; one in relation to the alleged physical abuse and a second charge for neglecting to take the child to the hospital promptly.

The trial will continue at 9:30 a.m. Wednesday in Judge Stevens courtroom.