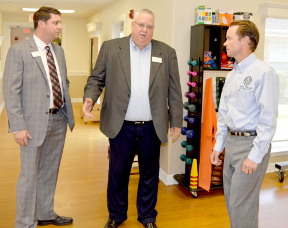 Ample Southeast Texas jobs are contributing to what one area nursing home says is the industry’s biggest challenges — finding enough good help willing to work for the wages paid.

District 21 State Representative Dade Phelan, R-Beaumont, visited Port Arthur’s Cypress Glen Nursing Home Tuesday to listen to the concerns of facility administrators, and take those concerns back to the next legislative session.

Ed Williams, vice president with Senior Care Centers, identified staffing as an issue that most all nursing homes deal with, but one made worse by increased pay increases for unskilled workers in other industries.

“For a CNA (a certified nursing assistant) they are paid less than what a fast food worker makes,” Williams said.

How we take care of our elderly is something that the state legislators need to address in the next session, he said.

Phelan said this past legislative session which concluded in May was somewhat in limbo where healthcare was concerned because of pending litigation concerning the Affordable Health Care bill.

“The state is in a wait and see mode,” Phelan said.

Still, health care is the second largest expense in the state’s budget.

The fate of health care has much to do with who is elected in Congress, Phelan said.

Phelan said this next session he expects to see legislators deal with changes in school finance.

“Right now there is a school finance law suit working its way through the courts,” Phelan said. “I think we will address health care and public education in the next session.”

An abandoned and boarded up Port Arthur home at Ninth Street and Atlanta Avenue was destroyed early Monday, but no... read more