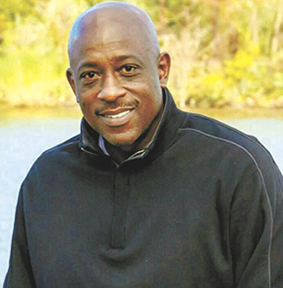 Fred Williams coached Kountze during the 1986-87 basketball season — while serving as principal — just so that he could pick his own successor.

Along came one of his former players, Andre Boutte.

“Not only that, he had a mobile home right next to me in Kountze,” Williams said.

When he first heard of his impending induction into the Texas High School Basketball Hall of Fame, he thought about those who helped him shape his 21-year coaching career. Two of them — James Gamble and Williams — are in the same hall.

“When I first heard of it, I just thought about all the coaches who mentored me in terms of coaching,” Boutte said. “You just try to challenge yourself in competing with the best coaches of the game in a competitive but friendly manner.”

Boutte, who now serves as athletic director of the Port Arthur Independent School District, learned about his selection for the hall about a month ago. The Texas Association of Basketball Coaches announced the Class of 2016 inductees Monday.

“It’s a surprise and it’s a great honor,” Boutte said. “Not only that, you are your nominated by a group of your peers.”

Boutte took over at Port Arthur Lincoln in 1989, one year after Gamble retired from there. He won state championships in 1991 and 1995 before becoming Ozen’s first head coach in 1997. He led the Panthers to a title in 2001.

“He came out of a program where he was highly successful as a player,” Gamble said, referring to Hebert. “He came into a program that was not down and out. It was good and solid. He came in and did what he needed to do. Everybody can’t be that successful.”

“The things that stick out are the relationships that were forged with your players,” Boutte said. “You don’t really think about Hall of Fame, you just think about developing your program to compete at a high level. I sit back and I’m amazed at how well were able to do year after year. The players blessed me. You look at the championships, but there were years you may not have won the championship, but you still made it to Austin. Those are some of the things I think back on.”

Yet, despite so much success, Boutte stepped down in the middle of the 2008-09 season to become athletic director in Port Arthur. Boutte wound up with a 562-118 coaching record.

“My program [at Ozen] was well-established,” he said. “It was an opportunity to show my loyalty to my current staff that was there. I thought that would be a perfect example to show my former school district that these people are capable of carrying on the tradition.”

Boutte graduated from Hebert in 1981 and played two years at Temple College before finishing his collegiate career at what is now the University of North Texas.

Boutte will be inducted May 21 at the El Tropicano Hotel in San Antonio. Monday’s public announcement came nearly a week after the PAISD officially hired a new boys basketball coach in Kenneth Coleman.

“We have a guy in coach Coleman who is really enthused about bringing Port Arthur back to when it’s mentioned, it’s mentioned among the best in the state of Texas,” Boutte said. “My victory today is seeing the coaches and athletes have success under my tenure. I’m not currently based on a won-loss record. It’s what my group of coaches and kids accomplish.”

• Wayne Tipton: Coached Deer (1962) and Gruver (1966) to state titles and led another to the Final Four; coached both boys and girls teams much of his 25-year career before his death in 1983