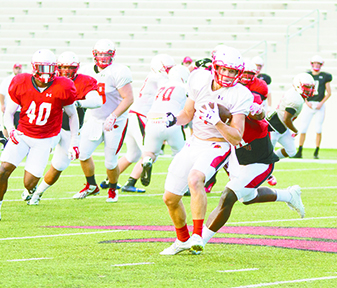 BEAUMONT — The first depth chart released during Lamar’s preseason camp listed Joe Minden “OR” Carson Earp as the first-string quarterback, although coach Ray Woodard warned the chart can change at any time.
Not enough push for change took place in Saturday night’s scrimmage.
“Not enough explosiveness and not enough points,” Woodard said. “We’ve just got to go back to work.”
Through the first few series, neither quarterback impressed. That was just the start of good news for the defense.
“They looked good,” Earp said of the unit facing him all night. “I thought their rush was pretty good.”
Despite the defense containing Minden, Earp and Blake McKenzie most of the evening, the scrimmage was mostly a struggle for the offense, which Earp conceded wasn’t all that sharp two weeks before kicking off the season against Oklahoma’s Bacone College.
Woodard still doesn’t think less of any one’s chances to start against Bacone over another.
“None of them had a good night tonight, just mainly because of the fact they had people in their faces all night,” he said.
Said Earp: “I just think we need more reps. We’ll get it together before our first game.”
Minden had a 58-yard beauty to Devonn Brown early on, but it was called back for offensive pass interference. McKenzie, working with the second team most of the night, took the field before Earp got his shot with the “ones”.
McKenzie led the first scoring drive, but not without taking a sack and incompletion near the end zone. Alex Ball kicked a 38-yard field goal.
It took much for the night for the offense to make some strides, and Earp was the only one to break through.
He hit a long pass to Port Neches-Groves graduate Jayce Nelson that set up a touchdown pass to Devonn Brown from 12 yards out. Brown made the catch in double coverage before punching it into the end zone.
Near the end of the 1-hour, 45-minute scrimmage (including a 15-minute break late), Earp completed a strike to Brown from 32 yards out, but the drive did not result in a score.
Still, the offense came out the break with a little more energy, Earp said.
No official score was kept, but call it a win for the defense, whose pressure successfully contained all quarterbacks throughout the night. The defense combined for six sacks.
“I came out with the attitude that I’m going to do everything I have to do to make the quarterbacks’ job harder,” junior defensive lineman Omar Tebo said. “It’s my own team, but at the same time, we all have to get better. We have to get better each and every day.”
While official score and time were not kept, Woodard said he wanted to make the camp’s second scrimmage as close to a game situation as possible, so he did by throwing in special teams plays.
“Clean night,” Woodard said, crediting the special teams. “Good snaps, good punts, good holds on the kicks. … We probably got more good film to watch and evaluate off the special teams than we did any other area.”