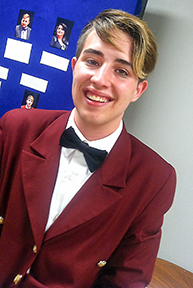 Jacob McMullin plays the opera-struck bellboy in “Lend Me a Tenor,” staged by Orange Community Players.

Days later I’m still laughing from the Orange Community Players’ production of “Lend Me a Tenor,” one of those hide-in-the-closet, identity switch, slam-the-door classics that I’d heard about but never seen.

OCP’s cast was all-around great, but I’ll take a moment to brag on Jacob McMullin as the bellhop. Don’t let the fact that my daughter is related by marriage get in the way that he was hilarious as one of the characters willing to do anything just to meet the famous opera singer who has come to town.

In one scene a gaggle of people are being chased around a couch so that we forget who is circling who. The bellboy stops to take a photo of those behind (or was it in front of) him, and they vainly pose for a moment before resuming their antics.

How do pecan lovers dress?

Fashions in a Nutshell may have some boho chic looks for fall. Norma Jordan and Linda Foster of the Gulf Coast Sertoma Club say they’ve noted the look is trending as they’ve rounded up looks for this annual show. The club will present the Groves Pecan Festival’s fall style show at a new luncheon time. Get your $15 tickets from The Courtyard Café in Groves or call 963-8786. The show is at 11 a.m. Saturday, Sept. 19 at the Café, 4321 Lincoln Ave., Groves.

Fashions will be by Hannah Bay’s, Shoogz, Oliver Maxwell’s and Dressin’ Up. Proceeds help the club offer scholarships and lend support to the Capland Center and Fetter’s Center.

She dines on the rinds

Last summer someone told me the best watermelons had a hollow sound when thumped. This year people stressed looking for... read more