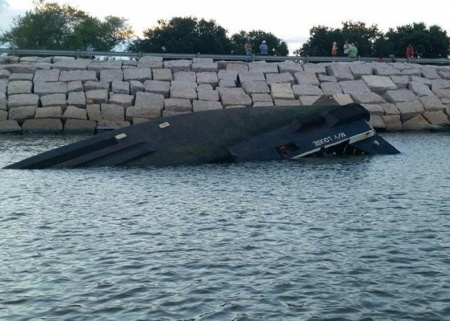 The towing vessel Louise capsized in the Neches River Aug. 21, 2015. Coast Guard crews responded to ensure all mariners were safe along the river during salvage and recovery operations by establishing a safety zone around the vessel. (U.S. Coast Guard photo by Coast Guard Station Port Arthur crew)

A portion of the Intracoastal waterway is closed to marine traffic after a tuboat capsized about one mile east of the former Woodrow Wilson school Friday.

U.S. Coast Guard Lt. Adolfo Viezca said they received a call of the capsized vessel Louise at about 6:45 p.m. Aug. 21. Four persons were on board at the time and all four were rescued by a good Samaritan vessel and are safe.

“The four individuals  are being interviewed by Coast Guard investigators to try and determine the cause of the incident,” Viezca said. Per standard protocol the four will undergo drug and alcohol testing.

An oil spill response team was on scene Friday night to place booms in the area in case of oil or fuel leak.

Witness statements are also being taken by the Coast Guard and the Texas General Land Office to determine how much oil and gas may have leaked in order to formulate a plan to keep from any environmental hazards.Currently there is a minimal sheen reported on scene; however the Louise has the potential to release 6,000 gallons of fuel oil, 70 gallons of lubricant oil, and 30 gallons of hydraulic fluid.

A salvage company is scheduled to be on site Saturday and divers will check the area and make assessments and salvage plans, he added.

All deep draft vessels have been rerouted offshore.

The ship channel may reopen by Saturday to smaller vessels such as tugs and barges.