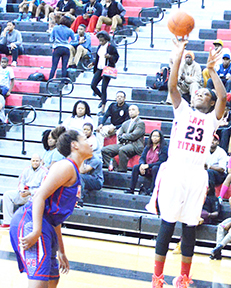 Port Arthur Memorial senior Jakeira Ford went to El Paso this summer and quickly fell in love with the town and the city’s university.
Ford recently made the decision to name the University of Texas at El Paso her college destination and to accept its basketball scholarship.
“UTEP has an amazing campus,” Ford said. “I fell in love with the city.”
Ford was not a stranger to UTEP and its history among the college athletics world.
Her favorite movie is “Glory Road”, the 2006 tale of Texas Western coach Don Haskins, who led the first all-black starting line-up to the NCAA national championship in 1966. Texas Western became UTEP in 1967.
“The movie was made out there,” Ford said. “They had all the guys on the wall and that really opened my eyes.”
Ford was named to the 21-6A all-district team in 2015 after posting 17.8 points and 10.7 rebounds a game as a junior. She’ll go to UTEP, which finished 12-16 last year and 7-11 in Conference USA action.
She drew offers from LSU, Houston, Texas A&M, Louisiana Tech, Stephen F. Austin, Florida International, Wichita State and Kansas State, to name a few. She had also been recruited by Southern California and Lamar.
“It got crazy,” Ford said. “The first thing that came to mind was, I needed to make a decision before the school year started. It was becoming stressful.”
One of the toughest things Ford will have to get used to is being more than 800 miles away from home. The drive to UTEP from Port Arthur can take about 12 hours.
“That is going to be tough,” Ford said. “UTEP really impressed me because they said if I need my parents at games, they will do everything they can to help out my family. That makes me feel comfortable about being so far away from home.
“Now I can focus on the Lady Titans and my senior year. I can’t wait for the season to get started. I believe in my team and I really do believe we have the chance to go to the state tournament this year.”