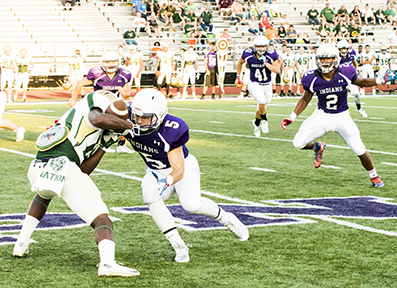 His Port Neches-Groves Indians need to see a team with speed and a roster full of talented players before the team starts the regular season on Aug. 29 against Clear Lake. West Brook and PN-G are set to kick off at 7 p.m. at The Reservation.

Last week the Indians faced the Little Cypress-Mauriceville Bears, and PN-G learned where exactly the holes were in their play.

“We have worked this week on everything we did poorly against LC-M,” Faircloth said. “Scrimmages are on the schedule to show you your weaknesses, and LC-M did that for us last week.”

One thing Faircloth had the Indians work on this week was angles on defense. He said the Bears running backs did a good job showing the PN-G defensive coaches what the players needed to improve on.

“You might not see those weaknesses when you are practicing yourself,” Faircloth said. “LC-M’s running backs were really fast so we need to learn to start running to different angles.”

Faircloth noted the Indians had a good week of practice since the LC-M scrimmage, and the team enjoyed getting into a game-week routine. His focus is now on a Bruins team that made the playoffs out of District 21-6A last year.

“Our players have a heightened sense of focus this week,” Faircloth said. “West Brook is a huge challenge for us. We want West Brook to show us our weaknesses and not Clear Lake next week. We will have another week between the Bruins and Clear Lake to fix what West Brook exposes in the scrimmage.”

PN-G’s entire defense can expect to be tested tonight as the Bruins bring a very explosive offense to The Reservation.

“Everyone on defense will be put to a test,” Faircloth said. “West Brook is a wonderful team to scrimmage for us. The Bruins are going to play at a high level and we hope we match their speed and intensity.”

West Brook’s Keith Corbin is one of the best receivers in Southeast Texas. He had 54 catches for 893 yards and 12 touchdowns.

West Brook’s offense line has a huge blocker for running back Cameron McKinney. Alfred Beverly is 6-feet-5 and weighs 335 pounds.

PN-G’s offensive line will play opposite West Brook defensive tackle Christian Bluiett, who has drawn interest from Texas and stands 6-feet-3 and weighs 261, according to 247sports.com.