Before he could fly … Charles had to overcome fears, disabilities 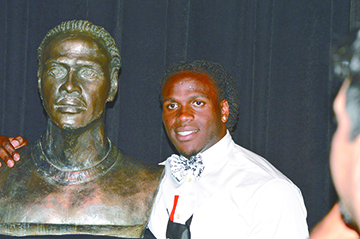 This is the first of a four-part feature on Port Arthur native Jamaal Charles, who currently stars as a running back for the Kansas City Chiefs. See Wednesday’s issue for part two.

Whether it was in the ways he moved or thought or read aloud, Jamaal Charles was always in a hurry.

Even when he downshifted to walk, it typically was by bouncing along up on his toes.

“Like he was trying to take off or something,” said Grant LaPoint, a senior patriarch of Charles’ family, which sprawls over the Gulf Coast of Texas.

But as Charles struggled through childhood, nothing suggested he would thrust to this sort of liftoff.

Before Charles showed world-class potential as a sprinter at the University of Texas, ran for the most yards in Chiefs franchise history and averaged more yards a carry, 5.5, than any NFL player ever, a learning disability eroded his confidence in all that he did.

In a town battling the typical tolls of poverty, without his father in his life, Charles ultimately took flight because of a nurturing extended family, plus teachers and friends in special education classes. Classes that led him to what he considered a life-changing opportunity to compete in Special Olympics at age 10.

“In classrooms, I felt I was the last one in the back,” Charles said in a series of recent interviews with The Star in which he offered a rare glimpse into his childhood challenges.

As an awkward, sensitive child, the youngest of four boys in his immediate family and the runt of what was then 32 cousins, Charles at times would cling to his mother, Sharon.

Mostly, though, he gravitated to his maternal grandmother, Mazelle Miller, the backbone of the family, whom he still considers his guardian angel years after she died.

Mazelle was the one who sensed something wasn’t right for Charles before anyone else did.

The house of Mazelle and Oscar Miller, where Charles and his mother lived for a time, was the place around which a gaggle of grandkids created track meets in the streets and played any sport you could name in the yard and driveway.

In that environment, Charles could be himself: a character, silly and clowning, telling corny jokes or doing imitations like the one of Michael Jackson dancing to “Billie Jean” in the talent shows his cousins would create.

Other times, Charles wasn’t as sure of himself.

Whatever the case, a smothering cycle of anxiety and doubt hovered over Charles into his teens any time he was outside the family.

“You were the guy that nobody wanted around,” Danny Gorrer, a childhood friend who also went on to the NFL, told Charles during a recent roast of the star running back in Port Arthur.

Now everyone could laugh because it was so long ago and Gorrer is so obviously fond of Charles.

Then, though, this was a painful reality.