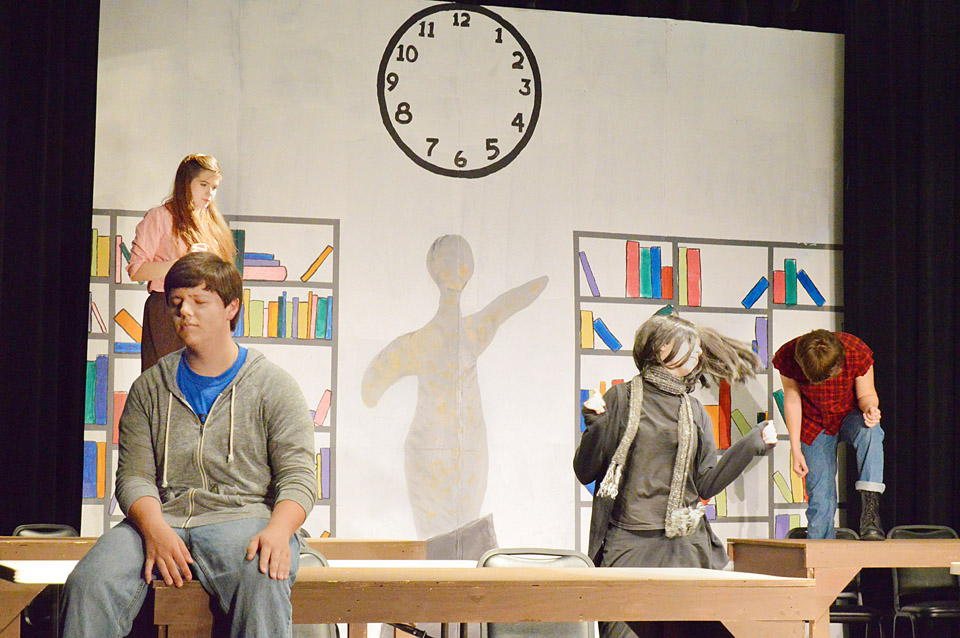 Resa Pletcher, left, Ross Lefort, Emelie Sullivan and Jason Blevins practice their roles as an iconic group of students in detention during a dress rehearsal for the Port Arthur Little Theatre Junior Board's production of "The Breakfast Club" at the Little Theatre Wednesday night.

PALT Junior Board to present ‘The Breakfast Club’

Nothing brings a ragtag group of teenagers together like an overbearing authority figure, preferably one who abuses their position of power.

For 30 years, Mr. Richard Vernon, the disciplinary principal at fictional Shermer High School, has served as a crucial point of hatred for high school students everywhere.

Without his antics in “The Breakfast Club” — a 1985 hit movie that reached both mainstream and cult classic success — the students marked as a brain, an athlete, a basket case, a princess and a criminal wouldn’t have seen through their own stereotypes to find the commonality between them. 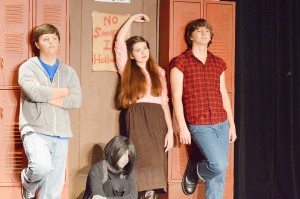 Ross Lefort, left, Emelie Sullivan, Resa Pletcher and Jason Blevins practice their roles as an athlete, a basket case, a princess and a criminal during a dress rehearsal for the Port Arthur Little Theatre Junior Board’s production of “The Breakfast Club” at the Little Theatre Wednesday night.

Rhiannon Pletcher, 19, said while much has changed since “The Breakfast Club” hit the box office, one thing that never will is life as a teenager navigating the “rough waters” of high school. It’s why she agreed to help adapt the “iconic film” into a stage production.

The Port Arthur Little Theatre Junior Board will present its modified version of “The Breakfast Club” for one weekend only, beginning Friday night.

“The Junior Board usually teaches and directs the CELT Kids show during the summer, but this is the first time we’re doing a Junior Board show,” Rhiannon, director of “The Breakfast Club,” said during rehearsal Wednesday night. “This is going to be a special premiere, one-weekend event that you don’t want to miss.”

Rhiannon, who served as Junior Board present from 2011-14 and retired when she graduated high school, said the cast selected “The Breakfast Club” and asked her to come back and direct them.

“I said I’d be interested in directing, but I’d have to watch the movie first — I’d never seen it before. Of course, they were all shocked,” she said. “My Bender can pretty much quote it all the way through. I’ve now seen it seven times and, I have to say, I agree with their choice for the first Junior Board show.” 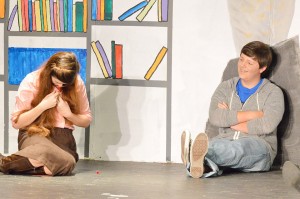 Resa Pletcher, left, and Ross Lefort practice their roles as Claire Standish and Andrew Clark during a dress rehearsal for the Port Arthur Little Theatre Junior Board’s production of “The Breakfast Club” at the Little Theatre Wednesday night.

Rhiannon said she and the Junior Board members took the movie script and “cleaned it up quite a bit,” eliminating all the “F bombs and more graphic” sexual references, but kept the core values and many of the scenes true to the film.

“We’re trying to stick as close to the movie as we can, because it is a very iconic teenage story,” she said. “It’s about these five completely opposite characters that come together one day in detention. It’s rough waters in the beginning, but by the time they leave at the end of the day, they’re walking off in couples and as friends.”

“Claire is the princess — very entitled, Miss Popular, the Queen B,” Resa said. “She’s really upset when she gets detention, but during the day she realizes just how conceited she is and how much of her life is ruled by what her friends think.

“By the time she leaves the school, she knows it doesn’t matter who she’s friends with or what other people might think of them as long as she’s happy.”

Jason Blevins, 16, said he grew up watching “The Breakfast Club” with his father and knew right away which role he would audition for. 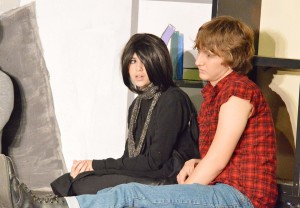 Emelie Sullivan, left, and Jason Blevins practice their roles as Allison Reynolds and John Bender during a dress rehearsal for the Port Arthur Little Theatre Junior Board’s production of “The Breakfast Club” at the Little Theatre Wednesday night.

“I watch this movie religiously, and I’ve always connected with (John) Bender,” Jason said. “Bender’s marked as ‘the criminal.’ He’s that typical stand-out-of-line guy — always getting into trouble. But you see it’s because he has a terrible home life.

“While everyone else is hating detention, he’s used to it. He spends the day trying to bring everyone else out of their shells and showing them who they really are. He puts everyone else in his shoes for a day to show them what it’s like to be seen as the outcast.

“It’s so relatable, because we see this happen every day in high school. We’re given these labels and marked, in a way, by what others think of us. But we’re all just trying to be who we are and find connections that are real.”

Resa said the “clean” version of the movie that will be on stage this weekend should be suitable for “tweens” and older. 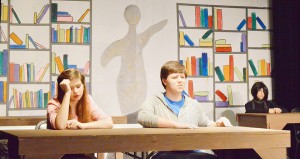 Resa Pletcher, left, Ross Lefort and Emelie Sullivan practice their roles as a princess, an athlete and a basket case in detention during a dress rehearsal for the Port Arthur Little Theatre Junior Board’s production of “The Breakfast Club” at the Little Theatre Wednesday night.

“If you’re a teenager, especially if you’ve never seen this, this is the place to be this weekend,” Resa said. “Times have changed so much, but this is one thing that hasn’t. It’s so relatable, and if you can’t see yourself in one of the characters, you see your friends in the characters.”

Showtimes for the PALT Junior Board’s production of “The Breakfast Club” are 7:30 p.m. Friday and Saturday, and 2:30 p.m. Sunday.