Groves hosting Movie in the Park 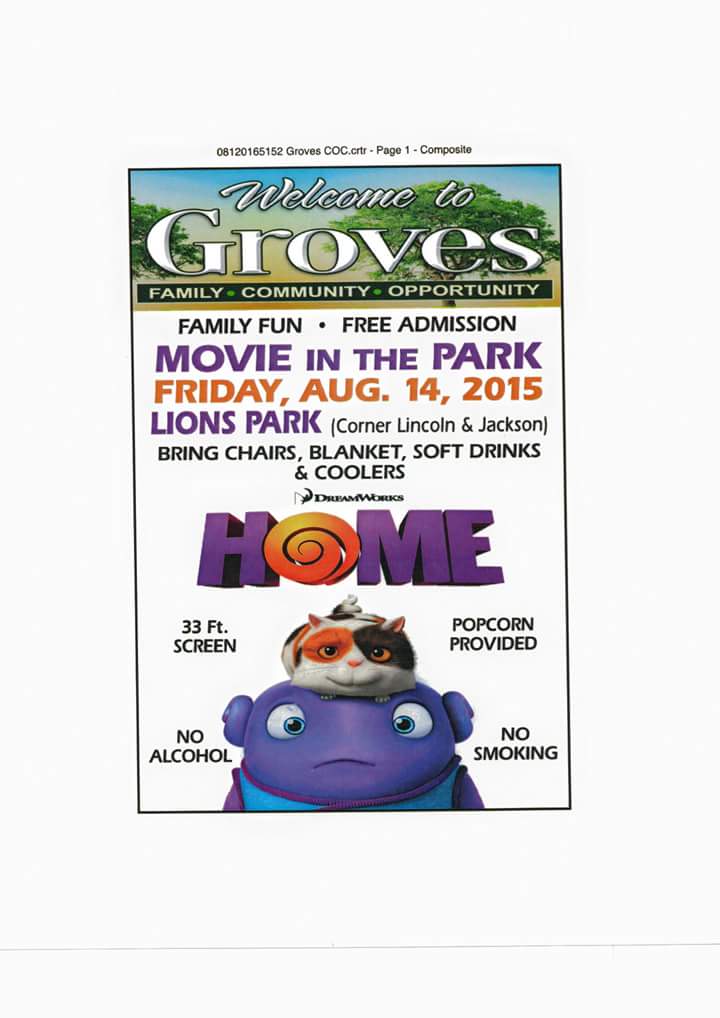 GROVES — Some down home family fun with free snow cones and a free showing of the Dreamworks animated film ‘Home’ is planned for Friday night.

Groves’ Lion’s Park, located at the corner of Lincoln and Jackson, will be transformed with the addition of a 33-foot screen at about 7:30 p.m. Aug. 14 and the feature movie begins at 8:30 p.m.

“It’s free for the entire family,” Groves City Manager D. Sosa said. “It’s at the end of the week and you can relax, go to the park, bring a blanket and law chair and watch the movie. It’s like being at a drive-in. It’s like going back to a slower, simpler time.”

Attendees are asked to bring chairs, blanket, soft drinks and coolers. No alcohol or smoking is allowed.

The idea of the Movie in the Park can about during a recent city council meeting and, in June, a local businessperson opened the park for a very successful, beginning of summer blowout.

“This is a family event and it actually promotes out new motto, ‘family, community and opportunity.’ This is a way to do something nice before the end of the summer, something that kids and parents can do together at no cost,” he said.

If the event proves successful, the city may hold more family events.

“We are looking to do several a year, especially when it’s fall and cooler,” he said. “We’d suspend the program during the winter and bring it back in the spring and summer. We’d love to do three, four, five times a year, depending on the weather and we have heard from some businesses who re interested in sponsoring future events.”

The city is hosting the event, which is sponsored by the Groves Police and Fire departments.