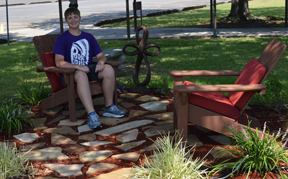 Aaron Porter relaxes in one of the chairs he helped refurbish in a new prayer garden at Holy Trinity Episcopal Church in Port Neches. Building the garden was part of the requirements for Porter's Eagle Scout Award.

Outside the entrance of Holy Trinity Episcopal Church in Port Neches a flagstone path leads to an inviting area complete with comfortable chairs, greenery, wind chimes, and a cross sculpture.

The church’s prayer garden— meant to be a place of meditation — is not only brand new; it’s a testament to what can be accomplished by one person with the help of others.

Seventeen-year-old Aaron Porter is that one person. The Port Neches-Groves senior recently spearheaded the project as part of requirements needed to earn his Eagle Scout Service Project designation.

“I hope it will attract people to pray, relax, or visit with other church members,” Porter, a member of Port Arthur’s Troop 75 at United Methodist Temple, said.

He is the son of Bud and Donna Porter, of Groves.

Typically, an Eagle Scout Project provides opportunity for a Boy Scout to demonstrate leadership abilities while, with the help of others, performs a project that benefits his community.

While thinking about what he could do to help better his community, Porter’s first thought was his church.

He approached the church’s pastor, Cliff Rucker, to ask for an idea.

Rucker said he immediately thought Porter’s group could create the first phase of what he hopes will be lushly landscaped church grounds.

“We had quite a bit of property, and we needed a place for people to come and sit and have a time of their own, we just needed to get the project started,” Rucker said.

When thinking about the project, Rucker said he envisioned something to similar to the Diocese in Navasota.

“Many of our parishioners did not know what to expect, so we put out a call and lots of contributions started coming in,” Rucker said.

Among those contributions was a team helpers made up of Porter’s church and family members, friends and other scouts.

“It was just grass and a blank space when we got started, and now it’s a prayer garden,” Porter said.

The group first cleared the grass, then put down a barrier to keep weeds out, paved the area with flagstone and put in some sand. Next, they planted flowers and greenery before adding refurbished wooden chairs that they had sanded and painted anew.

The cross sculpture was the Rucker’s touch, and the wind chime and a concrete bench was already there.

Porter said he has been a scout since Elementary School, and always had a goal to earn his Eagle Scout Award.

As he’s grown older, his love for scouting has not diminished, though his time has.

“Now, I’m big into the band. I play the trombone, but this year am one of the drum majors in the marching band,” Porter said.

He did find time, however to complete the project, about five or six hours devoted to building the prayer garden on July 27.

“I feel like it is a lot more inviting now, and it adds another element to the outside of the church,” he said. “It was nice to take charge as the leader, but it was harder to be the leader than to just follow orders.”

Before earning the Eagle Scout rank, Porter has a couple more merits badges to earn before going before the Eagle Board of Review — all to be accomplished before his 18th birthday on Oct. 24.

The Eagle Scout Service Project, or more simply the Eagle Scout Project, is the opportunity for a Boy Scout, Varsity Scout or qualified Venturer in the Boy Scouts of America (BSA) to demonstrate leadership of others while performing a project for the benefit of his community. This is the culmination of the Eagle Scout candidate’s leadership training, and it requires a significant effort on his part.[1] The project must benefit an organization other than the BSA, but it cannot be performed for an individual or a business or be commercial in nature.