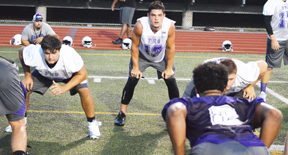 PORT NECHES — There is no scrimmage Friday between the Port Neches-Groves Indians and Little Cypress-Mauriceville Bears at the Reservation.
PNG coach Brandon Faircloth made it very clear to his team Tuesday morning, the Indians treat every opponent who comes to PNG High School the same way, all the time.
So instead of calling it a scrimmage, Faircloth had a message.
“We have 12 games on the schedule,” he said. “We want to win every time we step on the field.”
LCM and PNG varsity teams are scheduled to take the field at 7 p.m. Freshmen play at 5 p.m. and junior varsity kicks off at 6 p.m.
“We don’t like to call them scrimmages,” Faircloth said. “We like to call them games. I think it helps the focus. Someone is coming over here and we are going to try to beat them.”
The first part of the varsity action is set to include each team having 12 plays of offense.
“That makes sure you get to be able to be on the field,” Faircloth added. “You try to get into a rhythm. I think it is good to go 12 plays, that would be a really long drive.
“I am not a huge fan of it. I would rather just play. We could fake kickoff to the opponent, they get the ball on the 30 and then lets play.”
The seventh-year PNG coach said he and his team is ready to see an opponent on the other side of the ball instead of teammates.
“In practice you can simulate speed all you want but when there is someone else over there, everyone plays so much faster,” Faircloth said. “You have to get those game reps to be ready for our first game against Clear Lake. Having two ‘scrimmages’ is really nice. LCM is a good team and then West Brook the next week. It could not get us in a better position for the season.
“It’s fun to hit someone else. Two weeks against each other, they are tired of that. They are ready to transition to the next point. The kids are ready to focus on an opponent and come back as one unit.”

Sixteen area players, based on points accumulated in tournaments over the summer, earned invitations to participate in the Southern Texas... read more