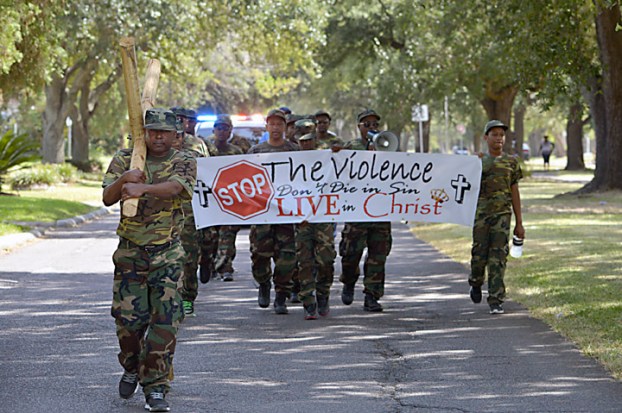 About a dozen men clad in green camouflage clothing marched in unison while singing the hymn “We Are Soldiers” for more than a mile down Port Arthur streets while preaching the message of stopping the violence and coming to Christ on Saturday.
Bishop James Reed of Chosen Generation Evangelistic Ministries manned the bullhorn with the message garnering attention from passing motorists and residents from DeQueen Boulevard, down Woodworth Boulevard to the tree-lined Thomas Boulevard and ending at Barbara Jacket Park on Gilham Circle.
Along the way Jeff Criss carried a wooden cross in front of the group as the continuous hymn was repeated and members of Port Arthur Police Department provided an escort for the march. 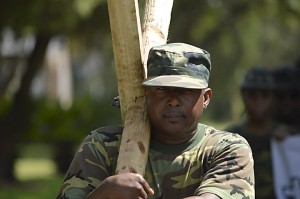 The group halted for a few minutes before entering the park.
“What does the banner say?” Reed asked the men in the group, referring to the large banner with the words ‘Stop the violence. Don’t die in sin. LIVE in Christ’ to which the group responded. “Today, we glorify God bringing it back to the One show started it from the beginning.”
With heat indices well above 100 degrees, Thomas Lane locked arms with Isaiah Taylor, physically assisting the older man in the journey.
“He walked and endured the march,” Lane said upon arrival at the park. “Maybe his actions can motivate other people to come out and participate.”
Taylor took a seat in the shade of a tree with wife Eva Pryor and granddaughter Caydence Victor, 3, nearby.
“This is about people coming together in Christ and to show our love and support of one another,” Taylor said. 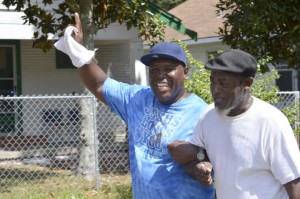 Participants in the event trickled in, some taking a seat in the bleachers at Barbara Jacket Park under the shade of the pavilion, as musicians sang Christian songs. Reed explained their mission, now that they had arrived at the park, was to reach out to the community, the needy, the homeless, the violent and to “love on them and give them what God gave us.”
“We are making a sound in the atmosphere, let them know God’s here, wake them up. It’s time to come together,” Reed said. 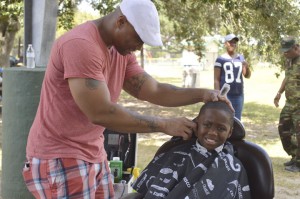 The group distributed more than 400 flyers in about a months time as well as spreading the word via Facebook.
Reed, a Port Arthur native, has traveled through the years before returning home. When asked what led him to God, he was quick to respond.
“God came to me and I haven’t been the same ever since,” he said. “I was saved at 24 and I’m 52 now.”
Reed plans to have more outreach projects at local housing apartment complexes in the future.
The main message of Saturday’s march was to reach out to the men in the community to stop the violence and empower them to be role models instead of destroying each other while giving glory to God.
E-mail: mary.meaux@panews.com
Twitter: MaryMeauxPANews