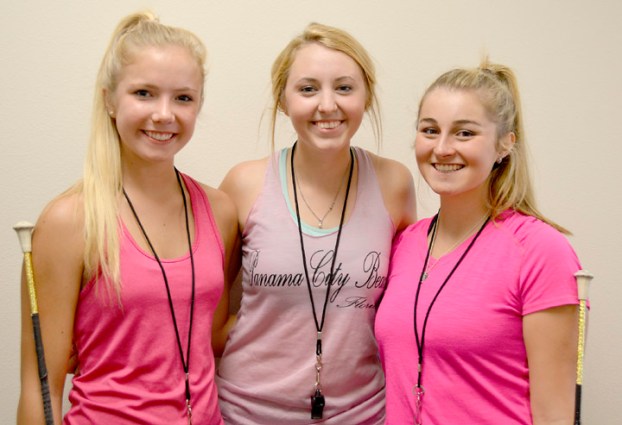 NEDERLAND — Candace Hebert, Kaitlyn Marley and Alyza Steen have some work to do before the Friday night lights illuminate the field and the multitude of cheering fans fill the stadium.
The trio began summer band practice at Nederland High School, where they will lead the group on field as the 2015-2016 drum majors. Hebert, a senior, is head drum major, and Marley, who is a senior, and Steen, a junior, are co-head drum majors.
All three were part of the NHS Goldenette twirling line prior to earning spots as drum majors.
“This is something you aspire to when you come up in the band,” Hebert said during a break at practice this week. “It’s a privilege and honor to be named heads of the band.”
Marley and Steen agreed, saying that being a drum major helps with leadership skills and is something that can help them in their futures.
Nederland High School Band Director Greg Rose explained that the drum majors are responsible for leading the band performing on the field and during other events such as parades.
“And with the kind of band we are (military style), the drum majors also give commands throughout the performance to stop, start and change direction,” Rose said.
Hebert, who plays the flute in the band, plans to attend either Lamar University or Texas A&M to prepare for a career as a cosmetic dentist. Marley, who plays clarinet as well as having played the tenor and baritone saxophone, plans to attend Lamar University where she will double major in music performance and music education as well as becoming a college twirler.
Steen, a flute player, said she will likely attend Lamar University but is undecided on a major.
The drum majors, who are preparing for their new roles, described the feeling of being in the spotlight.
“It’s a high, you go out there and don’t know what you’re doing, it’s ingrained, like being on auto pilot,” Hebert said. “It’s one of the best feelings, being under the lights, the attention is on you. Not everyone can say they lead a 250 piece band.”
Marley and Steen said it’s a privilege to be in the position as they nodded in agreement when Hebert described the feeling of being front and center.
Nederland High School band has tradition of excellence with their top ratings in University Interscholastic League contests. The marching band has earned perfect marks for more than 25 consecutive years, and band students have earned top spots in solo and ensemble contests.
E-mail: mary.meaux@panews.com
Twitter: MaryMeauxPANews