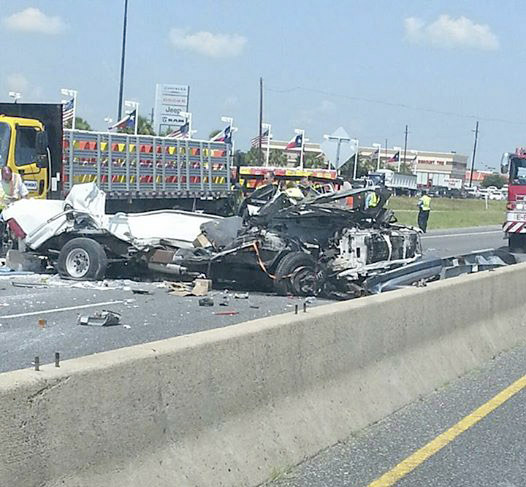 There were no major injuries in a wreck that stalled traffic along the 7900 block of Memorial Boulevard on Monday. Photo courtesy Regina Buchanan from KFDM Facebook

The driver of a 1993 Ford F-150 truck was cited for failure to maintain a single lane of traffic after his vehicle struck the rear of an ice truck and flipped Monday.
The incident occurred about 11:25 a.m. Aug. 3 in the 7900 block of Memorial Boulevard.
According to a police spokesperson, two large ice/water delivery trucks were parked legally off the roadway when they were approached from the rear by the Ford truck. The driver of the Ford told police he had a mechanical problem and lost control of the vehicle striking one of the ice trucks.
The Ford flipped but the driver was not thrown from the vehicle.
Two people in the ice truck were transported to the Medical Center of Southeast Texas and the driver of the Ford was taken to Christus Hospital-St. Mary.
Injuries ranged from mild to moderate, according to police.