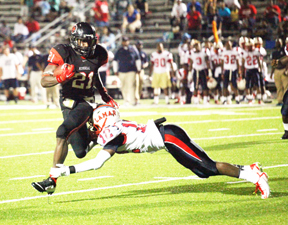 News file photo Former Port Arthur Memorial running back Corey Dauphine and the Titans went 3-7 in 2014 and missed the playoffs.

It was a tough season for the Port Arthur Memorial Titans in 2014 and the team has to wait an extra week to officially put the season in the past.
Memorial went 3-7 on the year, the first losing season since going 3-6 in 2008.
The Titans start practice Aug. 10 after participating in spring practice.
Memorial started the year out on a high note, winning 56-0 against Beaumont Ozen and 17-14 over Beaumont Central. Both those Beaumont schools went on to reach the playoffs out of District 22-5A.
Then came the painful losses, both on the field and the scoreboard.
First, Jacorie Jones was injured to start the year and then UTSA signee C.J. Levine went down and missed the rest of the year. Those two major injuries on defense put the Titans in a bind.
It started to show when Houston Lamar defeated the Titans 58-28 and racked up 500 yards of offense.
Two weeks later, Channelview and returning quarterback Jalen Hurt really did a number against the Titans in a 70-49 Falcons win.
The Falcons put up 704 yards on the Titans, the most yards ever given up by Memorial in team history.
Memorial, after a loss to Deer Park, won its first and only District 21-6A game against Baytown Sterling, 28-24, on a last second pass-and-catch from Kadon Harrison to Travon McClain.
Memorial ended the season with losses to La Porte, Beaumont West Brook and North Shore.
It was not all doom and gloom for the Titans as Memorial featured two of the states most highly-recruited and talented running backs.
Corey Dauphine, who is now a freshman at Texas Tech, rushed for 1,232 yards and 11 scores while Baylor commit Kameron Martin had 903 yards and 17 scores.
Harrison started all 10 games as a sophomore and threw for 1,125 yards and eight touchdowns with 11 interceptions.
McClain led the Titans with 50 catches for 657 yards and seven touchdown receptions.

Are you ready for some football? If any reader said no, stop now and go get your head checked. Monday... read more