Abandoned Carver Terrace to be training ground for firefighters 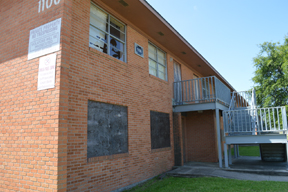 Boarded up and broken windows signal an unsuccessful effort to keep vandals out of the closed-down Port Arthur Carver Terrace apartments.

Now boarded up with all it’s inhabitants moved elsewhere, the future of Port Arthur’s Carver Terrace Apartments is still in flux while the city’s Housing Authority awaits permission from the federal government to demolish the abandoned low rent housing complex.
In the meantime, the city’s fire department is making plans to utilize the multi-building two-story complex as a training ground.
Mike Free, PAFD training battalion chief, said the abandoned apartments would be used for ladder training, forcible entry, veneration — any kind of firefighter training exercise that does not involve burning.
“It is big enough we can do a lot of stuff over there,” Free said.
After Hurricane Ice damaged the public housing facility in 2008, residents of Carver Terrace were moved to greener spaces in accordance with a U.S. Environmental Protection Agency mandate that prohibited rebuilding in the same site because of its close proxmity to local refineries.
For the past year the abandoned buildings have sit empty in the shadow of billowing smokestacks while the Housing Authority seeks about $800,000 in federal funding to demolish the structures.
Whether the U.S. Housing and Urban Development Agency decides to fund the demolition project has not yet been decided, Robert Reid, PA Housing Authority board member, said.
But, one thing is certain — the PA Housing Authority Board is committed to tearing the facility down even is they have to pay for it themselves.
“As a board we are unified in our commitment to doing what we have to do to get Carver Terrace torn down,” Reid said. “It is not definitive, we have applied to use HUD money to tear it down, but there is a possibility we will not be able to get the funding.
If HUD does not pay to raze the buildings, the Housing Authority will have to look to their own funds, Reid said.
It could be several months longer before the Housing Authority knows HUD’s decision.
“We knew going in it would be a nine to 12-month process before finding out definitively if they are going to raze the complex,” Reid said.
During the wait to find out if HUD will provide demolition funding, the Housing Authority has granted Port Arthur’s Fire Department permission to use the facility as a training ground.
Reid said the board was glad to approve the fire departments request to utilize the building for training purposes.
“We want to be a good neighbor to the community and when helping the fire department out, we are helping the entire community,” Reid said.
Once the building is taken down, the EPA is requiring a green space be left to serve as a buffer between the fenceline community and refineries.
Once the green space is created, the PA Housing Authority will be responsible for maintaining it, Reid said.
E-mail: sherry.koonce@panews.com
Twitter: skooncePANews.com