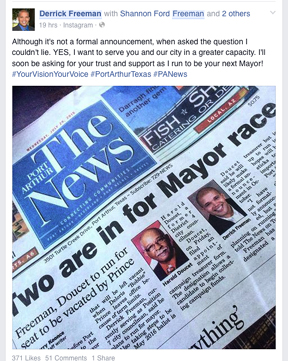 Port Arthur Position 7 City Councilman made this posting on his Facebook Page Wednesday.

Less than two days after Position 7 City Councilman Derrick Freeman said he  planned to run for Port Arthur mayoral seat, the man he beat two years ago has announced his intent to run for the vacant council seat in the November election.
Port Arthur businessman Reginald Trainer called The News Thursday to announce he would be seeking the seat vacated by Freeman when he announced his candidacy for mayor.
Only problem is there may not be a special election in November.
Freeman said Thursday that when he talked with The Port Arthur News Tuesday, he was not making a formal declaration of his candidacy.
“When I was asked if I planned to run for mayor I answered truthfully and said yes, but it was not a formal annoucement of my campaign,” Freeman said Thursday. “I am fully aware of the state election code. I would hate for a small group of people to try and cost the citizens money for a special election over something personal.”
Freeman said when he does make a formal announcement he is fully prepared to resign the at-large position he was re-elected to in May 2014.
City Attorney Val Tizeno said the city is reviewing Freeman’s statements concerning his candidacy to determine how to proceed.
“We are making sure the requirement of the Texas Constitution has been met,” Tizeno said, adding that she had just read the article in Wednesday’s edition of The Port Arthur News.
Tizeno said she would need to meet with City Council on the matter before taking any action.
At issue is whether Freeman is required to immediately resign his Council seat, or wait until a later date after he makes what he says will be a formal announcement.
Texas Election Law dictates that a local office holder who decides to run for another position, such as mayor, should immediately step down once they declare their candidacy.
What’s known as Texas’ Resign to Run rule in the state’s election code forces an existing officeholder to resign from office before running for a new office if the amount of time left in the existing term is more than one year and 30 days.
Freeman started his second year of the three-year term in May, leaving roughly a year and nine months before his term is completed in May 2017.
Freeman said he is aware of the law, but has not yet declared his candidacy.
But, what constitutes a declaration of candidacy?
The Texas Attorney General’s office answered that question in two separate opinions, one published in 2008 and the other in 2010.
The AG opinion says an officeholder announces candidacy for another office by making a written or oral statement from which a reasonable person may conclude that the individual intends, without qualificaiton, to run for an office.
A statement made in a private conversation does not constitute an annoucement of candidacy for the purposes of the “resign to run” provision.
Further, Texas election law states a candidate may not reconsider candidacy to avoid resignation. Once the annoucement is made, the resignationis automatic.
Freeman has also posted his intention to run for the mayoral position on Facebook.
When there is a vacancy triggered by a candidate’s announcement to run for another office, a special election will be called within 120 days after the vacancy occurs. The rule holds true even if there is no uniform election date during that time period.
In Freeman’s case, finding a replacement will hinge on when his candidacy was announced.
The last time a Port Arthur City Council candidate resigned after announcing candidacy for another office was in 2013.
Harold Doucet was elected to the District 4 City Council seat in 2011. Two years ago he made a bid for the mayoral seat, but was defeated by Prince.
Before announcing his candidancy in Feb. 2012, 14 months before the May election, and again Tuesday, Doucet said he called the Texas Secretary of State to educate himself on the law.
“I knew I would have to go ahead and resign,” Doucet said of his 2013 bid for mayor. “I knew when I put it out there that I was going to have to run and I would have to resign.”
Trainer has said he plans to run for Freeman’s Council seat whether he resigns immediately, or a later date.
“All I can say is my name is in the hat — the business man is back in the running and this time to win it all,” Trainer said.
E-mail: sherry.koonce@panews.com
Twitter: skooncePANews